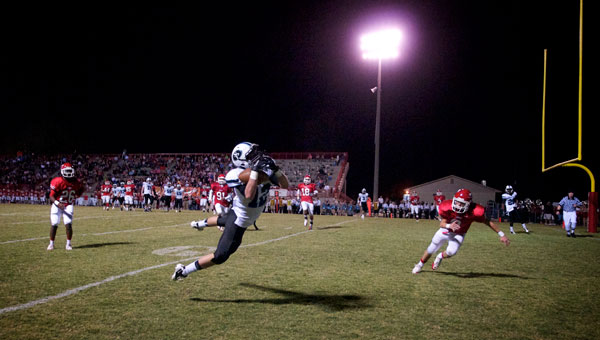 Spain Park High School head football coach Ben Berguson knew early season tests against some of the best teams in the state and nation would eventually pay off for his Jaguars.

Berguson sees a lot of confidence oozing from his players with the Class 6A playoffs just two weeks away.

“I think we’re starting to peak at the right time,” Berguson said. “I’ve just watched a lot of young guys get better each week. It’s quite an accomplishment to finish 5-2 in this region.”

The Spain Park passing game, led by sophomore Nick Mullens, was firing on all cylinders in the Jaguars’ final region contest. Mullens, who started the season as the back-up quarterback, completed 14-of-23 passes for 228 yards with four touchdowns, including a 6-of-7 performance for 89 yards and two scores in the second half to break open a 17-7 lead at  halftime. 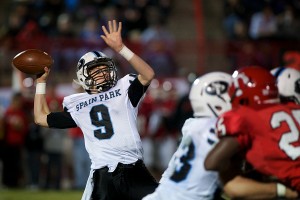 Senior receiver Zak Michael was on the receiving end of many completions by Mullens. Michael caught four passes for 121 yards and three touchdowns in the victory. 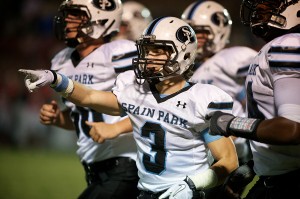 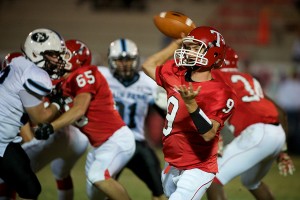 After the two teams traded punts to start the game, Mullens led the Jaguars on an 11-play, 66-yard scoring drive, capped by Jake Hoffman’s 21-yard field goal, to give Spain Park a 3-0 lead with 2:54 remaining in the first quarter.

Thompson responded quickly with an 8-play, 65-yard drive, capped by Matherson’s 16-yard touchdown run, to take its only lead of the game with 11:52 left in the second quarter.

Spain Park retook the lead with 6:40 remaining in the first half when Michael reeled in a 70-yard touchdown pass from Mullens to give the Jaguars a 10-7 advantage.

Following a punt by Thompson, the Jaguars melted the clock in the second quarter with a nine-play, 59-yard drive to extend their lead to 17-7. Reid Reinagel capped the drive with a 12-yard touchdown pass from Mullens.

Spain Park added two touchdowns in the third quarter. Michael reeled in touchdown receptions of 5 yards and 35 yards to push the Jaguars’ lead to 31-7.

Matherson capped the scoring with his 2-yard touchdown run, which was set up by his 46-yard scamper on the play before, with 37 seconds left in the third quarter.

The Jaguars will travel to Tuscaloosa County in the first round of the Alabama High School Athletic Association Class 6A playoffs Nov. 5.