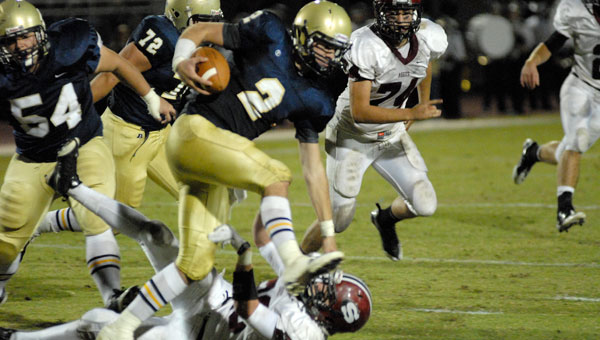 After throwing an interception in the end zone with the less than two minutes to play and the Lions clinging to a three-point lead against Sylacauga High School with a region title on the line, all Cunningham could do was stand on the sideline and watch.

Cunningham’s prayers were seemingly answered as the Briarwood defense came up with an interception — its third of the game — to seal a 29-26 win for the Lions Oct. 22 at Lions Stadium, giving Briarwood (8-1, 7-0 in Class 5A, Region 5) its second straight Alabama High School Athletic Association Class 5A, Region 5 championship.

“That’s one of the top goals every year is to be a region champ,” Briarwood head coach Fred Yancey said. “I’m proud of our guys for coming out here and playing against a good team and doing the things that it took to come out on top.”

One area Briarwood was able to exploit was the Aggies’ run defense.

The Lions used four rushers to churn out 261 yards and four touchdowns on the ground.

“We felt like our offensive line was going to have to rise to the occasion and play a great game,” Yancey said. “ I think, all in all, they did a good job.”

Junior tailback Sam Whitaker led the ground attack, rushing for 102 yards on 16 carries. Cunningham had 64 yards on nine carries and a touchdown. Matthew Furuto carried the ball twice for 20 yards. Quarterback Ben Craft rushed for three touchdowns and finished with 80 yards on 19 carries.

Sylacauga (7-2, 5-2 in Class 5A, Region 5) marched 73 yards on its first possession of the game to take an early 6-0 lead. The eight-play drive was capped with quarterback Matthew Collier’s 1-yard sneak with 8:46 left to play in the first quarter. Robert Masters’ extra-point attempt was unsuccessful.

The Aggies’ lead wouldn’t last long, as Briarwood answered on its next possession to take a 7-6 lead on Craft’s first touchdown run — a 5-yard scamper — with 4:10 remaining in the opening quarter.

Briarwood tacked on two more scores with another Craft scoring run — this one from 16 yards out — and a 19-yard dart up the middle from Cunningham to push its lead to 22-6 with 4:57 left to play in the first half.

That was enough time for the Sylacauga offense to cut into the lead. Collier beat the Briarwood defense with his arm this time, eluding defenders and scrambling to his left to find wide receiver Marcus Gamble by himself in the end zone for a 12-yard touchdown pass to bring the score to 22-13 with 1:02 remaining before the break.

Collier went 16-for-21 for 245 yards with a touchdown and three interceptions. The senior also accounted for 34 rushing yards on 11 carries and a score.

The Sylacauga defense set its offense up with prime field position after Andrew Jones recovered a Briarwood fumble at midfield on its first possession of the second half.

Four plays later, the Aggies were in the end zone on a 1-yard touchdown run from tailback D’Morrise Bledsoe, who had 19 carries for 86 yards and two scores on the night.

The teams traded fourth-quarter touchdowns to set the score at 29-26 with 2:58 to play in regulation.

With the Lions facing a third-and-10 from the 31-yard line, Cunningham’s number was called.

“I called the play,” Yancey said. “We really thought we could sneak in and steal the cheese on that and catch them napping. We thought we were going to score a touchdown.”

Instead, Cunningham, a backup quarterback, took the handoff after going in motion and heaved a pass in the end zone for Pearson, who was blanketed by Sylacauga’s Jeremy Murphy.

“Coach told me to throw it as far as I could,” Cunningham said.

It went far enough for Murphy to extend his arms and make the interception for the touchback.

Any comeback attempt was halted four plays later, however, when Roy Gilbert picked Collier off for the final time with 1:59 to play to preserve the victory and ensure the region crown.

“It’s incredible,” Cunningham said. “We have some new starters on the team, so it’s just awesome.”

The Lions will close out the regular season against Class 4A member Anniston Oct. 28 before hosting Mortimer Jordan Nov. 5 in the first round of the AHSAA Class 5A playoffs.