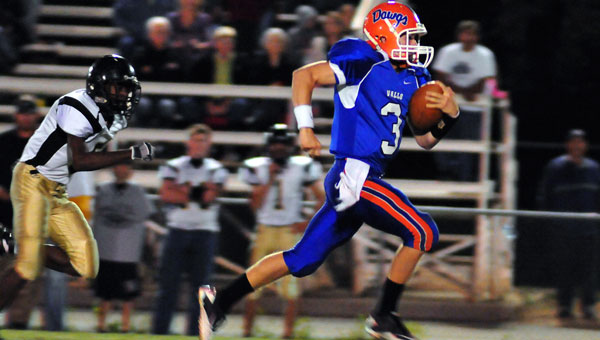 The Montevallo High School football team fell short in a comeback bid in the Bulldogs’ 25-22 loss to visiting Hale County in a Class 3A, Region 4 contest Oct. 22.

The Bulldogs erased an 18-0 deficit to cut the lead to three points late in the game, but a Hale County interception at its own 5-yard line kept Montevallo from pulling off the comeback.

Taylor Burr completed 6-of-17 passes for 43 yards with two interceptions.

Chappell scored the Bulldogs’ first touchdown on a 3-yard run with 8:58 left in the third quarter to cut the lead to 18-7 following the extra point by Brett Gray.

Burr scored on a 47-yard run and converted the 2-point conversion with a running play with eight minutes left in the game to cut the lead to 18-15.

Following a touchdown by Hale County, Scaife capped the scoring with his 2-yard touchdown run with 43 seconds remaining. Gray added the extra point to cut the lead to 25-22.

Montevallo recovered its ensuing onside kick attempt, but an interception sealed the win for Hale County.