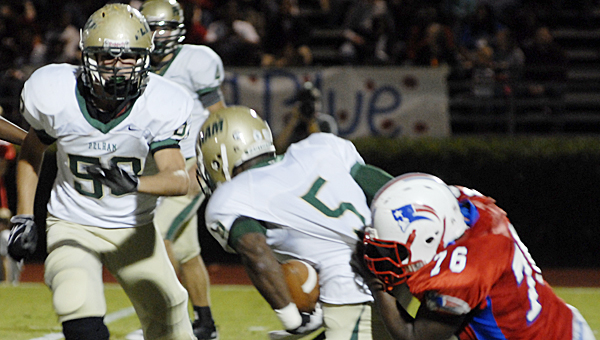 The Pelham Panthers played without one of their most experienced players Oct. 22 during their 50-21 loss at Homewood High School.

Pelham senior wide receiver Reed Bright, who has been a major weapon for the Panthers this season, sat the game out after suffering a concussion during the Panthers’ Oct. 15 loss to Spain Park.

“(Bright) is one of the few experienced seniors we’ve got,” said Pelham had coach Brett Burnett. “Anytime you lose someone like that, you’re going to feel it.”

All of Pelham’s points came in the second half, and the Patriots were not forced to punt until late in the third quarter.

After Homewood put up 42 unanswered points, Pelham answered late in the third quarter on a 6-yard touchdown run by Josh Cole.

Pelham recovered an onside kick immediately after the touchdown, before Cole found the end zone again on a 2-yard run. Haynes’ extra point brought the game to 50-14.

Following a Homewood touchdown and successful two-point conversion, the Panthers took advantage of a Patriot mistake.

After Pelham’s Zach Reese recovered a Patriot fumble, Pelham capped off a 61-yard scoring drive when Jacob Nichols reeled in a 37-yard touchdown pass from Tanner Adams. Haynes added the game’s final points to bring the score to 50-21.

Pelham will finish its season Oct. 29 when it hosts non-region foe Hewitt-Trussville.