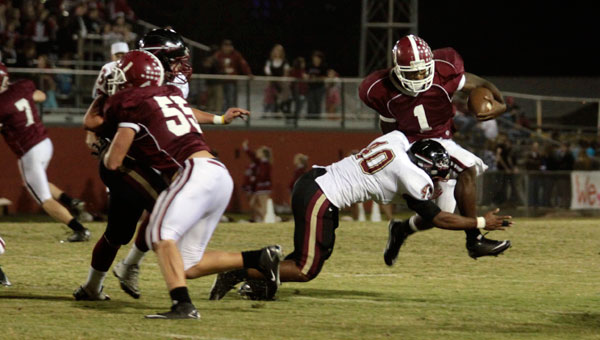 It was a Dr. Jekyll and Mr. Hyde night for the Wildcats.

The clock consuming, pounding running game of the Wildcats did all they could to keep their squad in the game — and they did.  However, the Shelby County defense couldn’t do anything to stop the Indian assault — and it showed.

Thirteen ticks into the game, the Indians scalped the Wildcats with a 62-yard touchdown run to claim an early 7-0 lead.

On the flip side, the Wildcats converted on a crucial fourth down when Ty Proctor connected with Evan McNeal from 15 yards out to knot the score 7-7.

Three plays later, the Indians reached the end zone again with a 61-yard touchdown pass.  The point-after attempt failed, but just five plays into the first quarter the Indians claimed a 13-7 lead.

On the Wildcats’ ensuing possession, a 15-play drive, starting from their own 27-yard line was a mirror image result of the first drive as Proctor connected with McNeal on a 2-yard touchdown toss.

With eight minutes remaining the second quarter, the freshman quarterback evened the score at 13-13.

As the second quarter rolled on, so did the Indian offense with a 12-yard scoring toss and 2-yard run up the middle.  Headed into the half, Pinson Valley held a 27-13 lead.

The second half was all Shelby County. The Indians had eight plays from scrimmage. The Wildcats scored on their first possession when Denzel Williams hit the end zone from the 7-yard line to cut the lead to 27-19.

On the next Pinson Valley possession, Shelby County defender James Rogers tight roped the sidelined and picked off an errant pass to put his team in a position to tie it up as the fourth quarter began.  It was the only Indians’ possession not resulting in a score.

The Shelby County offense seized the opportunity and added another score when Williams hit the end zone from the Indians’ 1-yard line, followed by a 2-point conversion from McNeal to Williams.

Halfway through the fourth quarter, the Wildcats had climbed back into the game at 27-27.  One play later, the Indians delivered the dagger with a 79-yard run.

On the night, the Indians ran a grand total of 23 plays from scrimmage racking up 284 total yards of offense, including 251yards on the ground.

On the opposite sideline, the Wildcats rolled up 410 yards of total offense, with 381 coming on the ground.  Williams alone rushed for 271 rushing yards on 45 carries — 22 yards more than the Pinson Valley offense.

The speedster finished the night with 332 all-purpose yards, two rushing touchdowns and a two-point conversion.

Shelby County closes out the 2010 season on the road Oct. 29 at Chilton County.

Pelham High School’s Josh Cole (5) escapes from a Homewood High School defender during the Panthers’ 50-21 loss to the... read more