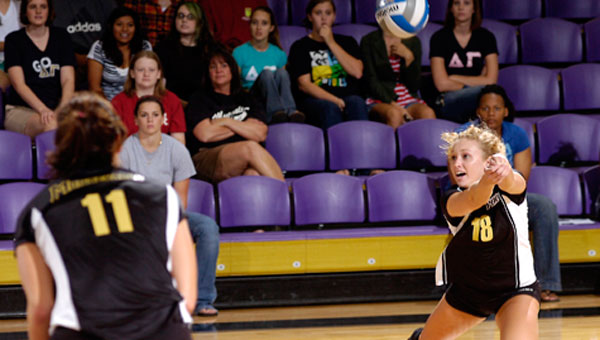 Montevallo split a pair of matches on the first day of the Invitational. The Falcons picked up a win over Peach Belt Conference foe Augusta State before dropping a match with King College.

Chapman chipped in eight digs and a team-high four blocks.

Ati, who was named the Peach Belt Conference’s Player of the Week, added 10 kills, five blocks and two service aces. Garrison finished with 39 assists and 10 digs. Chapman led Montevallo with 22.

The University of Montevallo men’s soccer team dominated Huntingdon College in an 8-0 shutout Oct. 20 before falling 1-0 to Lander University in a Peach Belt Conference match Oct. 23.

Senior Nathaniel Foster led Montevallo (13-2-1 overall, 5-2-1 in PBC) with a pair of goals in the Falcons’ win over Huntingdon.

Freshman goalkeeper Brendan Ledgeway, who was recently named the Peach Belt Conference’s Goalkeeper of the Week, picked up his sixth shutout of the season.

Montevallo, which is ranked No. 11 in the latest National Soccer Coaches Association of America Division II poll, got the scoring going just 16 minutes into the match as senior Alex Ghoja sent in a corner that was punched in the air by the Huntingdon keeper. Freshman Gary O’Neill found his way under the ball and headed it in for the game-winning goal.

Just more than a minute later senior Daniel Pelletier fired a shot that was saved by the Huntingdon keeper, but senior Austin McIntosh was there for the rebound and scored his second goal of the season.

In the 23rd minute junior Tyson Eyo sent the ball past the defense and found Foster, who collected it and sent it past the keeper for the Falcons’ third goal. The final goal of the first half came with just over three minutes to play in the period. Junior Phil Jackson lined up a free kick and sent it through the wall and off the post for the Falcons’ fourth goal of the match.

Just three minutes into the second half the Falcons won their 12th corner kick of the game and Ghoja sent in the corner to the near post, where senior Milan Pualic headed it in for the Falcons’ fifth goal.

Just more than four minutes later the Falcons earned another corner. Jackson sent in the ball and it went through the hands of the Hawks’ keeper and found the feet of sophomore Mike Rinzema,  who kicked it in for the Falcons’ sixth goal of the game.

Just under two minutes later Eyo once again found Foster with a lob pass, which Foster chipped over the keeper’s head for his second goal of the game.

Montevallo’s final goal came in the 84th minute as sophomore Stephen Beatty found senior Michael Riggle on the wing. Riggle dribbled through the defense and beat the keeper near post for his second goal of the season.

Montevallo dropped its second match of the season following the loss to Peach Belt foe Lander.

The Falcons’ best scoring chance of the match came at the 33:03 mark of the first half, as McIntosh came just inches away from giving the Falcons’ a 1-0 lead.

McIntosh was fed the ball on the right side of the box and fired a low shot that bounced off the near post and was just inches from finding the back of the net.

Just more than six minutes Lander used a free kick to take the lead. The kick was about 25 yards out from goal and Lander’s Jamie Davison chipped the ball over Montevallo’s four-man wall and found Aaron Brittain, who collected the ball and sent it past the keeper for a 1-0 lead.

Ledgeway made just one save in the match and allowed one goal.

The Falcons also held their Think Pink event during the Oct. 23 match against Lander as they warmed up in pink Montevallo Athletics T-shirts, which they sold at the gate to benefit the Susan G. Komen For the Cure Foundation.

Freshman Taylor Kerr powered the Montevallo offense as she led the Falcons (5-9-2 overall, 3-4-1 in PBC) with two goals, including the game-winner, in the win over Lander.

The Bearcats broke through first at the 10:07 mark of the first half. Lander’s Kendall Couch sent a cross past the diving Montevallo keeper and Jamie Shaw poked it in for the Bearcats’ lone goal of the match.

Just more than a minute later sophomore Nicola Stolworthy chipped a ball over the Lander defense and freshman Christine Prince then flicked the ball over the keeper to tie the game at 1-1.

Sophomore Alyssa Maxwell made three saves in the first half while allowing one goal.

Just more than 13 minutes into the second half Prince collected the ball on the right side of the box and sent a cross in that was kicked past the keeper by Kerr to put the Falcons ahead 2-1. The score remained 2-1 for most of the second half, but with more than a minute left in the match, Kerr sent out a long clear that was headed by freshman Asgerdur Palsdottir and past the Lander defense.

Palsdottir ran down the ball and was heading down the field with the Bearcats in trail when she found a streaking Kerr, who kicked the ball past the Lander keeper for the final goal of the match.

Maxwell made two saves in the second half to keep the Bearcats off the scoreboard.

The Falcons’ lone goal in the Oct. 18 loss to North Alabama came from Prince, who scored her team-leading fifth goal of the season.

The Falcons fell behind early in the game as the Lions scored three goals in the first half. Maxwell made four saves in goal while allowing three scores.

Montevallo broke through in the 49th minute as Prince received a long pass from senior Alex Terhar. Prince shielded her defender and found herself one-on-one with the keeper and made her leave her feet. Prince then dribbled around and took the easy shot into the net.

The University of Montevallo men’s and women’s cross country teams competed at the Cherokee Trails Invitational hosted Oct. 23 by the University of Alabama in Huntsville at Indian Mounds Park in Oakville.

The Montevallo women finished fifth in the women’s 5K team standings. Haley Evans led the Falcons with her time of 20:08, which placed her 13th overall in individual standings.

The Montevallo men came in ninth in the men’s 8K team standings.

Mark McDonald led the Falcons as he finished 20th overall in individual standings with his time of 27:58.

The University of Montevallo baseball program will hold its Alumni Weekend on Oct. 29-30.

Montevallo will be hosting all former baseball players during the weekend, which will feature a golf outing and a meet-and-greet with current coaches and players.

University of Montevallo senior James Steer scored the lone goal for the Falcons in a 1-0 win over Georgia Southwestern... read more