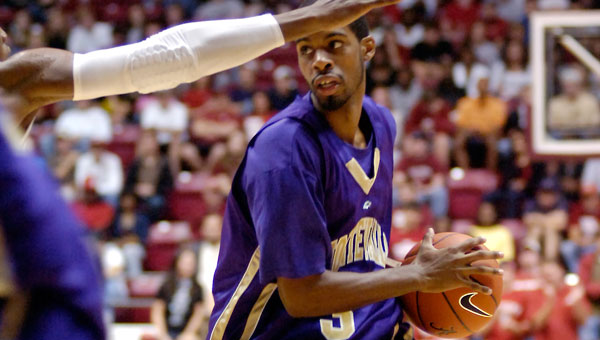 Former University of Montevallo men's basketball standout Gerald January is averaging 22 points per game in his first season with the Tromso Storm in Norway. (Contributed)

Former University of Montevallo men’s basketball standouts Gerald January and Marcus Kennedy are off to fast starts in their respective basketball seasons overseas.

January, who led the Falcons to the NCAA DIvision II Sweet 16 a year ago, is in his first season with the Tromso Storm in Norway.

January, a starting forward for the Storm, is averaging 22 points and eight rebounds a game for the Storm. January recently scored 30 points on 14-of-22 field goals, including 2-of-2 from beyond the arc, grabbed four rebounds and dished out four assists in Tromso’s 91-71 win Oct. 17 over the Ulriken Eagles.

Kennedy, who led Montevallo to the NCAA Division II Elite Eight in the 2006-2007 season, is beginning his fourth season playing professional basketball in Europe. Kennedy is averaging 26.2 points and 12.8 rebounds per contest for Residence Walferdange in the Diekirch League in Luxembourg.

Bobby Madison, a former Shelby County High School standout, is one of the top players in his league in Portugal.

Madison is averaging 18 points and seven rebounds per game for CAB Madeira in Portugal.

Madison spent two seasons at Southern Union Community College in Wadley after his career with the Wildcats. Madison transferred from Southern Union to Western Michigan, where he helped lead the Broncos to the 2004 NCAA Division I tournament.