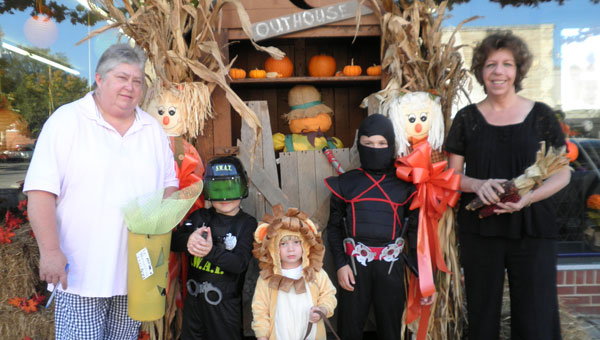 Monsterwalk started in 2000 at the suggestion of local appraiser, Gregg Rushton, who loved a similar event in Prattville. The Columbiana Merchants and Professional Association thought this would be a great way to give back to our community. Tables filled to the brim with candy and other trinkets will be manned by our local business owners and professionals and given to all who attend.

Susan Conn, owner of Main Street Florist, is the Monsterwalk Chair and is responsible for the beautiful fall decorations in downtown Columbiana. Call Conn at 669-3331 if your business would like to participate in Monsterwalk.

This year the Association decided to have a contest for best decorations in town decorated by the businesses. The contest was judged by people outside our community and a monetary gift was given to the first three places.

Children and their parents are invited to dress up, bring their Halloween bags, and keep the lines moving.

Anticipating the big Monsterwalk is John Paul Fox, age 7, as a fierce ninja warrior, and brother Jacob, age 6, as a macho SWAT officer. John Paul, second grade, and Jacob, Kindergarten, are students at Elvin Hill. They are the sons of Alice and Dusty Fox, the grandchildren of Debbie Zaroba, all of Columbiana, Paul and LaDonne Fox of Shelby, and Katie and John Robertson, formerly of Columbiana now living in Crawford, Miss. The precious little 2-year-old lion is Davis Ruston, son of Lauren and Ricky Ruston, grandson of Lisa and Jim Davis and Ricky and Margaret Ruston, and great-great grandson of Lohner Frances McLeroy, Anne and Jimmy Davis, and Buck Ruston, all of Columbiana.

Put on your Halloween costumes and join John Paul, Jacob and Davis for a monster walking fun-filled time.