Saddle up your horses at BK Corral 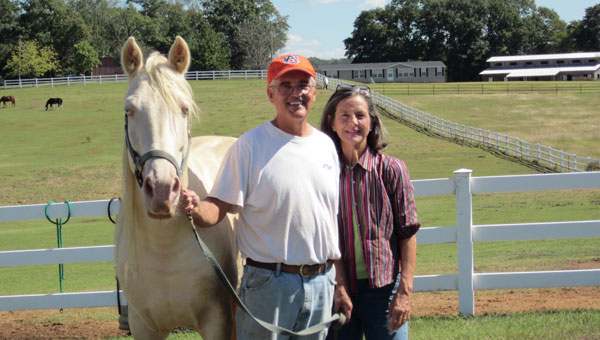 Byron and Patti Ketcham enjoy spending time together as they stay busy caring for their horses.

Byron and Patti Ketcham live on a beautiful 40 acre lot that backs up to Lay Lake in Wilsonville. Here they are living their dream of breeding horses. They currently own 22, although they have had as many as 38 in the past.

When they were expecting their ninth child, the couple bought seven acres in Camp Branch located in rural Alabaster. After buying a tractor and clearing the land, the Ketchams bought two Quarter horses.

“Since trails abounded, we enjoyed this with our family,” Patti said of when they first began to develop this interest.

Finally in 2001, the family bought the land in Wilsonville, which is when their dream of BK Corral, a family owned and operated business, expanded.

The barn needed renovating, but after much hard work went into it, they had their first foal born that same year. This was the time they decided they wanted to breed horses, and soon they owned stallions.

“At first we thought we would raise spotted walkers but since have enjoyed experimenting and have settled on Blue, our favorite cremelo stud,” Ketcham said.

BK Corral has sold horses to buyers in places like Louisiana to right next door to their neighbors. Foaling season is 11 months after they breed in the spring. They have enjoyed naming their horses each season, starting with the same letter of the alphabet, from Jurist, Journey, Joliet and Jesse, to Seab, Sully, Sly and Salty.

This year, they are named Polly, Petunia and Pii-ko.

The Ketchams learned to keep a close eye on them when they got a call in the middle of the night from the Shelby County Sheriff’s department saying, “I think your horses have been sighted in downtown Wilsonville!” This was before they had put up the white fencing, but it was quite a scare for the Ketchams, although all the horses were found grazing off of Shelby County 25.

Feed, hay and water is a regular routine for the family, and they explain their children will long remember their father saying, “Have the horses been fed?”

Their son, Richard, began teaching lessons several years ago and their daughter, Ruth, teaches now, too. This past summer they held their first Horse Camp, which was a huge success.

They also do trail rides in Wilsonville and travel to Alex City and Pell City, too.

Now that most of their children are grown and Bryon is semi-retired from his dental practice in Hoover, they said, “We are contemplating boarding horses and hope to continue selling our babies.”

With 14 grandchildren, Patti said, “We are thankful and blessed to enjoy this love of ours with them.”

Angela Horton teaches students at Wilsonville the importance of hand washing. Students and parents can work together to maintain the... read more