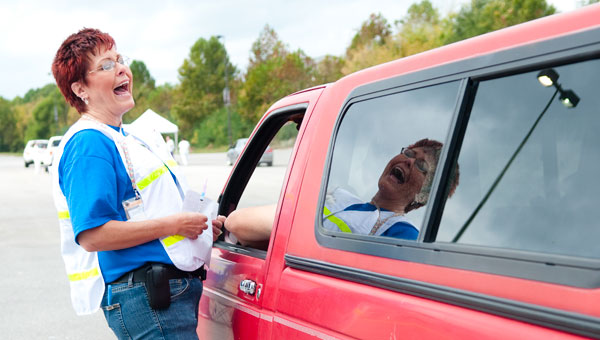 Rows of vehicles lined up near the entrance of the Verizon Wireless Music Center parking lot Oct. 26, but the motorists weren’t there to see a concert or attend a conference.

Throughout the morning, dozens of employees from the Shelby County Health Department, the Alabama Department of Public Health and several other local and state agencies manned the parking lot as they administered flu immunizations to patients in their cars.

High winds and dark skies didn’t deter the Health Department from immunizing more than 365 patients from about 8-11:15 a.m. Although the clinic was scheduled to last until 6 p.m., inclement weather forced the event to end at 2 p.m.

“We were hoping to do about 1,000 today, but God is in control of the weather,” said Shelby County Health Department Immunization Manager Karen Bush. “But the weather hasn’t been extremely bad or cold today. It’s gone extremely well so far.”

As motorists entered the parking lot, Health Department representatives gave each car an immunization form, which the patients filled out while waiting in line. At the next station, the Health Department collected and reviewed the information to ensure the patient was able to receive the vaccination. For those who didn’t have an insurance or Medicare or Medicaid card, the department charged $5 for the shot.

At the third stop, Health Department officials administered the flu shots while the patients were still in their cars. The final station allowed the motorists to learn more about the Health Department’s offerings.

The entire process took about six minutes from the time the patients entered the parking lot, Bush said.

“If you actually come to the Health Department, that immunization process can take 30 to 45 minutes at the very least,” Bush said. “It would easily take us weeks to see the number of people we have already seen today.”

The drive-through idea came from similar events hosted by the Calhoun County Health Department, and allowed the participants to conveniently and quickly get their yearly flu shots, Bush said.

“Calhoun County has done it a couple of times, and it worked well for them, so we decided to give it a try,” Bush said. “We haven’t had any traffic jams, and there hasn’t been any major accidents. It’s been going very well.”