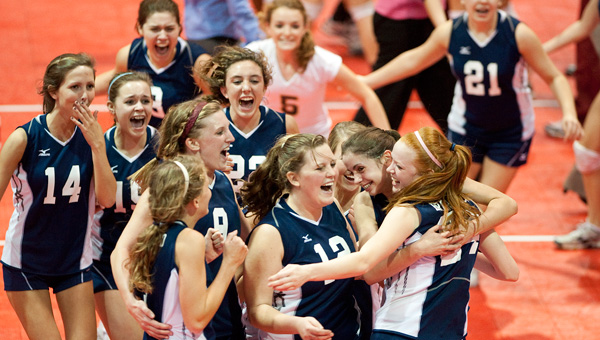 The Briarwood Lions, who are headed to the state championship on Thursday, celebrate their semifinal victory on Wednesday night. (Reporter Photo/Jon Goering)

PELHAM — Briarwood Christian School coach Tien Le stood in the middle of the Pelham Civic Complex with his back arched and his arms raised in the air.

It became a familiar scene, as Le did it after nearly every point in the late stages of Briarwood’s match-clinching win in the fourth game of the Alabama High School Athletic Association Class 5A semifinal match Oct. 27 against Faith Academy.

As the Lions scored the final point, Le twirled around twice with his arms in the air just a few feet away from his players, who rushed to the center of the court to celebrate a return trip to the Class 5A state chamionship match following a 25-20, 9-25, 25-23, 25-15 win over Faith Academy. 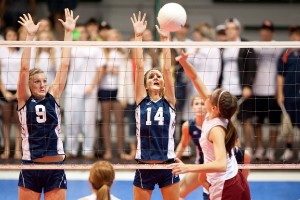 Briarwood, which is seeking its eighth state championship in school history, will face St. Paul’s in the Class 5A championship match Oct. 28 at 3 p.m. The Lions won seven Class 3A titles between 1991 and 1999.

“Just beating John Carroll in the quarterfinals was enough,” said Le, who is in his first season as the Lions’ head coach after serving as a longtime assistant under Tammy Richardson at Pelham. “I felt like everything after that was just gravy. For us to play in the state championship match is nothing short of a miracle.”

Seniors Katie Briley and Kate Carter led Briarwood (22-17) with eight kills each in the semifinal match. The duo also added five digs and three blocks each.

Briley, who missed part of the 2010 season with an injury, said playing in the state championship is a reward for the adversity her squad facing in an injury-riddled regular season.

“It’s amazing,” Briley said. “It’s finally all come together and everybody is completely healthy.”

The Lions coasted in the first game of the semifinal match against Faith Academy, which knocked the Lions out of the 2009 Class 5A state tournament in the semifinal round.

Briarwood fell behind 9-2 and struggled throughout the rest of the way as it dropped the second game of the match. The Lions fought off the Rams to clinch the third match and kept a healthy lead in the fourth and final game to clinch a trip to the Class 5A title match.

The Lions fell to St. Paul’s in the Class 5A championship match three consecutive seasons from 2006-2008. Briarwood is looking for its first Class 5A title in school history.