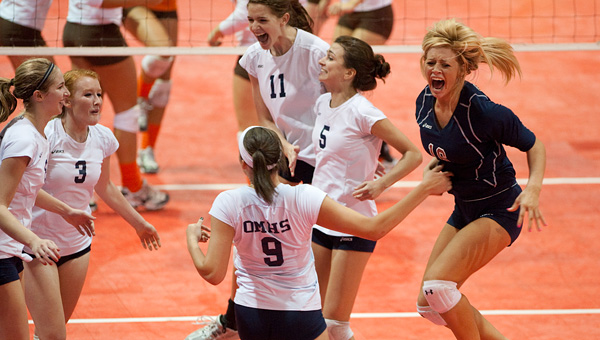 Skinner referred to Tammy Richardson, the state’s third all-time winningest coach in high school volleyball in the state of Alabama. Richardson took over as the Eagles’ head coach prior to the 2008 season after leading Pelham to two Class 6A championships. 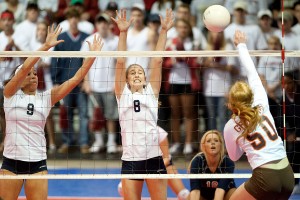 The Oak Mountain defense tries to block a spike by a Grissom hitter during the game Oct. 27. (Reporter Photo/Jon Goering)

In only two seasons, Richardson has led Oak Mountain to back-to-back Elite Eight trips and will lead the Eagles in their first appearance in a state title match since 2002 following a 15-25, 25-19, 25-12, 26-24 win over Grissom in the Class 6A semfinals Oct. 27 at the Pelham Civic Complex.

“(Richardson) has pushed us so hard and we’ve just gone with it,” Skinner said. “It paid off today and it will pay off tomorrow.”

Skinner led the way for Oak Mountain. The University of Alabama volleyball commitment recorded a team-high 23 kills in the semifinal match, including 10 in the deciding fourth game.

The Eagles dropped the first game 25-15 before storming back to win the final three games.

The Eagles coasted in the third game with a 7-0 run and a 6-0 run in the game. Oak Mountain sealed the win in a tight fourth game with two kills each by Skinner and Cosgrove and a kill by Goodwin.

Skinner, who will finish her high school career with a trip to the state championship match along with fellow senior captains Payne and Lauren Dasher, said the underclassmen have played key supporting roles in the Eagles’ success.

“The underclassmen have done a great job backing up the seniors,” Skinner said. “It’s not just the seniors that want to win. It’s everybody.”

By WESLEY HALLMAN / Sports Editor PELHAM — The Briarwood Christian School volleyball team labored through most of the season... read more