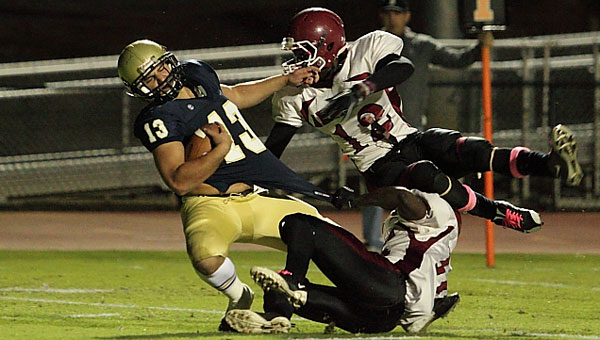 Briarwood Christian School senior Sam Whitaker drags an Anniston defender with him during a run in the Lions' 28-7 win over the Bulldogs in their final regular season game Oct. 28. (Contributed/Jimmy Mitchell)

Defensive lineman Jake Whaley can be added to the disabled list following the Lions’ 28-7 win over Anniston in their final regular season game Oct. 28.

Despite the losses on the defensive side of the ball, Briarwood coach Fred Yancey is keeping a positive outlook as the Lions prepare for their Alabama High School Athletic Association Class 5A playoff opener Nov. 5 against Mortimer Jordan.

“If this wasn’t a pretty deep and resilient team, it would have folded,” Yancey said. “These kids keep fighting through it.”

The Lions’ defensive unit handled the adversity well as it held a potent Anniston offense to only 274 yards, including 58 passing yards.

Briarwood (9-1) forced Anniston to turn the ball over on downs twice on drives deep into Lions’ territory in the first half and picked off two passes, including one in the end zone to end another Anniston drive.

Meanwhile, the Briarwood offense racked up 387 yards on offense and jumped out to a 21-0 lead at halftime to put the game away early.

Ben Craft completed 13-of-22 passes for 228 yards and two touchdowns in the win. Craft also rushed 30 yards and a touchdown on 10 carries.

Sam Whitaker rushed for 105 yards and a touchdown on 19 carries.

Craft scored the first touchdown in the game with his 1-yard quarterback keeper with 7:22 remaining in the opening quarter. Wilson Whorton added the extra point to give the Lions an early 7-0 lead.

Whitaker added a 7-yard touchdown run with 9:35 left in the first half. Furuto ran it in for the 2-point conversion to push the lead to 15-0.

Cunningham reeled in a 40-yard touchdown pass down the left sideline with 1:25 remaining in the second quarter to give the Lions a 21-0 lead heading into the locker room at halftime.

Anniston cut the lead to 21-7 following a 1-yard quarterback keeper by Josiah Atkins with 4:57 remaining in the third quarter. Rodarius Houston added the extra point.

Briarwood capped the scoring with a 21-yard touchdown pass from Craft to Robert with 9:14 remaining in the game. Whorton added his second extra point in the game to push the lead to 28-7.