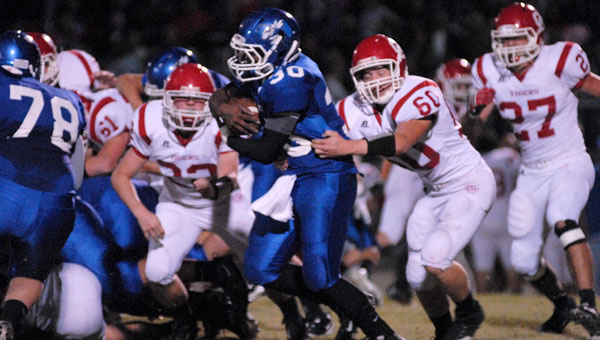 Neither was quarterback Jake Ganus.

Moments after breaking the postgame celebratory huddle with his team near the 30-yard line following the Hornets’ 55-14 thumping of Class 4A, Region 5 runner-up Oak Grove (8-2, 6-1 in Class 4A, Region 5) in the final game of the regular season Oct. 28, Waldrop said there wasn’t anything to talk about.

“We’ll have a banquet at the end of the year to think about (the regular season),” Waldrop said. “I think our kids are on point. They know what’s ahead of them.”

What lies ahead for Chelsea (8-2, 6-1 in Class 5A, Region 5) is a trip to the Class 5A playoffs, where the Hornets will host Cullman High School in the first round Nov. 5.

Ganus, who was part of last season’s 2-8 team that failed to make the postseason, uttered a two-word reminder of just how far the Hornets plan on going.

“State championship,” he said. “If we believe and we work as hard as I know we can, I think we can do it.”

Still, the Hornets made sure there was no letdown before looking ahead to their second season.

Ganus, who has scored 11 touchdowns in the Hornets’ last three games, was once again at the center of the Hornets’ offensive onslaught, accounting for 299 total yards (128 passing, 171 rushing) and three touchdown passes while finding the end zone once on the ground.

The Hornets erased an early seven-point deficit to take a 14-7 lead on a 5-yard Ganus touchdown pass to fullback Blake McLaughlin with 2:43 left in the first quarter.

McLaughin’s scoring reception was preceded by Hunter Picklesimer’s 55-yard kickoff return to knot the score at seven, answering Oak Grove’s touchdown on the opening drive of the contest.

The Hornets reeled off the next 28 points of the game, including Ganus’ 85-yard scoring dash down the right sideline, to take a 42-18 halftime lead.

“I broke the corner, and then I saw a safety and put a move on him,” Ganus said. “Adrenaline kicked in and I just took off. I was gone.”

Waldrop said it’s good to have his quarterback playing his best ball when it counts.

“I hope he can make those plays next week,” Waldrop said. “We’re not putting those points up in these football games the way we are without him. I’m very proud of him.”

The Hornets tacked on two touchdowns in the second half to close out the scoring.

Waldrop said his team still has room for improvement heading into next week’s playoffs. One area is the rushing defense, which surrended 183 yards and two touchdowns on 14 carries to Oak Grove running back Jimnarrius Furlow and 257 rushing yards total.