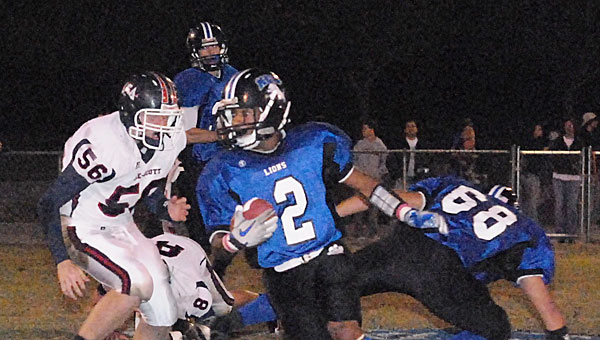 Kingwood Christian School head football coach Vince Elliott couldn’t imagine a better way to send his seniors off after their final game with the school.

Many of the team’s seniors struggled through a winless season only a year ago, but they never gave up, Elliott said.

As senior quarterback Kevin Woody scored the game’s final points with less than a minute left in the Lions’ 39-26 victory over visiting Lee-Scott Academy, Kingwood capped off a 7-4 season record.

One more region win would have sent the Lions to the playoffs for the first time since 2007. Woody and running back Tyrone Pope each finished the 2010 season with more than 1,000 yards passing and rushing, respectively.

“I knew they would be ready for tonight. I knew, win or lose, that these seniors were going to do something special tonight,” Elliott said. “I was outcoached tonight, but our guys were not outplayed.

“Our seniors really stepped up this season, and the younger guys followed,” Elliott added. “Our guys never quit, and they never stopped believing in themselves. This gives us a lot of momentum going into next season.”

Kingwood was first on the scoreboard, when Tyrone Pope broke free for a 17-yard touchdown run on the Lions’ first possession of the game. However, Pope was unsuccessful in his two-point conversion, giving the home team a 6-0 lead.

On their first possession of the game, the Lee-Scott Warriors answered back on a 9-yard touchdown run. Their successful point-after attempt gave the Warriors a 7-6 advantage.

On the first play from scrimmage during the next series, the Lions regained the lead when Woody ran the ball 65 yards to score. A boggled snap prevented Kingwood from completing the two-point conversion.

Kingwood scored again early in the second quarter, when Pope returned a punt 70 yards for the touchdown. A missed extra point gave the Lions an 18-7 lead.

Shortly before halftime, the Lions added eight more points when Jordan Myers reeled in a touchdown pass from Woody, and Dalton Sparks added the two-point conversion.

The Warriors came storming back after halftime, scoring on a 3-yard touchdown run, but failing to add the point after, bringing the game to 26-13. Lee-Scott closed the gap to 26-19 after a Kingwood turnover set up a Warrior 35-yard touchdown pass.

The Lions answered on their next play from scrimmage, when Pope ran 69 yards to score. An unsuccessful two-point conversion gave Kingwood a 32-19 edge.

A few plays later, the Warriors closed the gap again on a 10-yard touchdown run and successful point-after attempt.

Lee-Scott was poised to score again with a little more than a minute left in the game, but the Lions’ defense stopped the Warriors on fourth down to regain the ball.

Kingwood took advantage of the possession, when Woody ran the ball 53 yards to score with less than a minute left in the game. Pope’s successful two-point conversion brought the final score to 39-26.