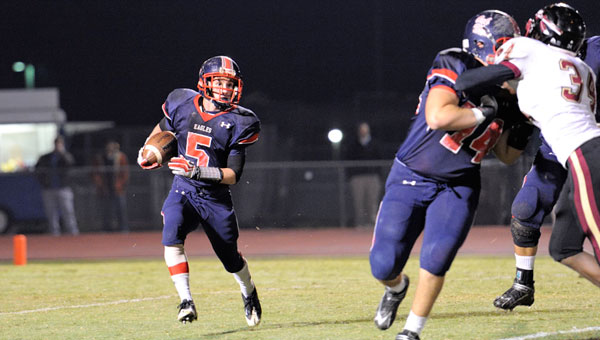 The Oak Mountain football team hasn’t had a whole lot to celebrate this season, but the Eagles were able to give their seniors a farewell victory.

“I’m happy for the seniors to go out with a victory,” Oak Mountain head coach Jeff Harris said.

Bostick set the Eagles up with prime field position after returning the opening kickoff of the second half to the Indians’ 42-yard line. The senior running back finished what he started when he later found the end zone from 3 yards out to give Oak Mountain a 7-0 lead with 9:06 left in the third quarter.

The Eagles seized the momentum and scored the game’s next two touchdowns.

Forrest found wide receiver Jakaryus Redwine for a 34-yard touchdown pass late in the third quarter. The duo hooked up again — this time from 29 yards out — to extend the lead to 21-0 with 9:35 left in the game.

Pinson Valley (5-5, 4-3 in Class 5A, Region 5) avoided the shutout late in the final quarter when quarterback Kaleb Harris connected with Earnest Robinson for a 14-yard touchdown strike.

Harris said he was happy to see his team close the season on a high note.

“It’s been a tough season,” Harris said. “I’m proud of the way the kids stuck with it and persevered. They never considered rolling over.”