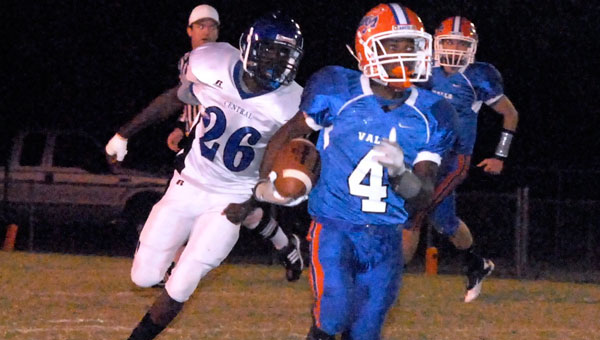 MONTEVALLO — At 5-foot-4 and 126 pounds, Montevallo running back RJ Scaife can be elusive on a football field.

The Central Coosa defense found out Oct. 29 just how tough it can be to corral the junior scatback.

Backfield mate Garrius Chappell added 115 yards and one touchdown on 22 carries. Quarterback Taylor Burr completed 6-of-9 passes for 76 yards and two touchdowns in the win on Senior Night.

The Bulldogs built the season-ending momentum by creating early momentum in the contest, jumping out to a 17-6 halftime lead behind a first-quarter 4-yard touchdown run by Scaife, a 23-yard Brett Gray field goal and a blocked punt return from approximately 10 yards out with 2:14 remaining in the opening quarter.

After Central Coosa quarterback Jalan Thomas fumbled on the Cougars’ opening possession of the second half, Chappell finished off a four-play, 26-yard drive with a 3-yard scoring run to push the lead to 24-6 with 5:59 left in the third quarter.

Taking advantage of Central Coosa miscues was a common theme for Montevallo, as the Bulldogs scored 24 points off five Cougar turnovers.

Thomas, who finished the night 9-of-15 for 166 yards and a touchdown, coughed up the ball four times with two interceptions and two fumbles.

“We knew what they were going to do by formation,” Williams said. “We were able to stop everything they wanted to do.”

Montevallo built a 37-6 lead late in the third quarter, but Thomas used his legs to score from a yard out with 43 seconds left to cut the lead to 37-14.

Scaife fielded the ensuing kickoff at the 4-yard line, darted untouched up the middle of the field and outraced the Central Coosa coverage team to the end zone to give Montevallo its sixth score of the night and quickly sway the momentum back in favor of the Bulldogs.

“(I was) just trying to hit my holes hard, not fumble the ball, make my cuts legit and get to the end zone,” said Scaife, who topped 1,000 rushing yards for the season with his performance. “Just trying to make big plays for the team because at the end of the day, we just want that win.”

But Scaife said the game wasn’t about individuals. It was about the team and its seniors.

FROM STAFF REPORTS The Spain Park High School Jaguars jumped out to an early lead on the road at Clay-Chalkville... read more