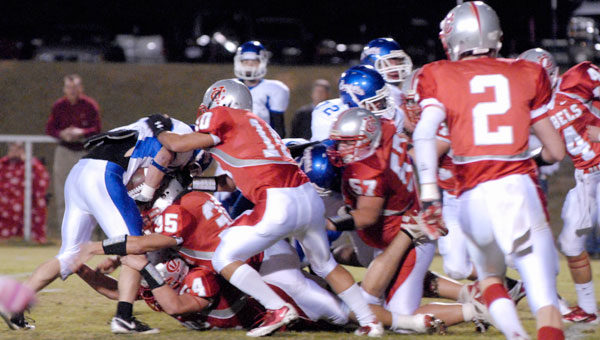 HARPERSVILLE — Coosa Valley Academy senior Hunter Rowe made a proclamation to his teammates in the middle of Don Greene Stadium minutes after a 7-0 loss to visiting Crenshaw Christian Academy in the Rebels’ final regular season game Oct. 29.

If Rowe and the Rebels get their wish, they’re likely to earn a rematch in the Alabama Independent Schools Association Class 1A championship game.

Coosa Valley knows what to expect following the loss to the Cougars — a defensive battle.

The Rebels shut down Crenshaw Christian for three and a half quarters before a late 94-yard drive by the Cougars handed Coosa Valley only its second loss of the season.

While the defense shined, the offense struggled. Coosa Valley could manage only 183 total yards on offense.

The Rebels never reached the Crenshaw Christian red zone. The deepest offensive drive by Coosa Valley came late in the second quarter and ended with a Bullen interception.

Coosa Valley tried to counter a 27-yard touchdown run by Crenshaw Christian junior Will Moses with 5:31 remaining in the game. However, the Rebels’ final offensive drive ended with a fumble by Bullen at midfield in the final minute.

Coosa Valley coach Vince DiLorenzo said the Rebels’ inability to move the ball on offense was the biggest factor in the loss.

“Our defense played well enough for us to win,” DiLorenzo said. “We had no continuity on offense. We would take one step forward and two steps back.”

Despite the loss, DiLorenzo remains confident the Rebels can earn a rematch with Crenshaw Christian in the AISA Class 1A championship game if they can stay healthy. DiLorenzo hopes Rowe and Bullen, who is playing with an ankle sprain, will be ready to go in the first round of the playoffs.

“If you want another shot at (Crenshaw),” DiLorenzo told his team, “you’ve got to come out here Monday ready to practice. I want to see them again in three weeks.”