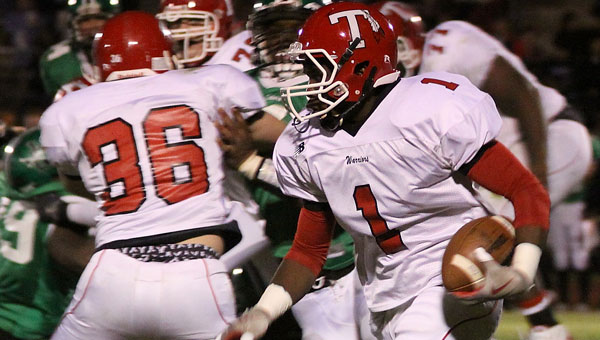 HOMEWOOD — Thompson High School ended the first chapter of the Red Alert era with their ninth loss of the season as the Warriors fell on the road Oct. 29 to John Carroll, 13-9.

The Cavs took the opening kick and drove 68 yards.  After punching it in from the 1-yard line, the Cavs missed the point after attempt and held a 6-0 lead.

Thompson put together an eight-play drive that covered 80 yards, but couldn’t capitalize with a touchdown inside the red zone.  A Matt Nall field goal got the Warriors on the board.

“We didn’t want to just finish the season tonight, but we wanted to be finishers,” said Thompson coach Bruce Hill. “We wanted to show we could finish a game, but we didn’t capitalize on the things necessary to win this one.”

The Warriors put together another 80-yard drive to start the second half aided by a personal foul by John Carroll.  The drive was capped off with a 39-yard touchdown pass from Trey Matherson to Demarcus Threatt to give the Warriors a 9-6 lead.

John Carroll added a score in the third quarter to regain the lead.