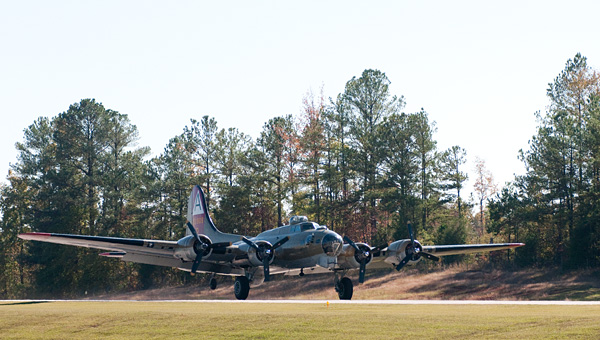 A B-17 lands on the runway at Shelby County Airport on Oct. 29. (Reporter Photo/Jon Goering)

CALERA — As WWII veteran John Hard examined the antique bomber plane, the B-24 Liberator, on display at the Shelby County Airport Oct. 29, he shook his head slowly and said, “It’s still not as good as the B-17.”

Hard, from Chelsea, flew 35 missions over Germany in a Boeing B-17 during the war and, like many pilots, is still partial to his plane.

“We didn’t think this thing was near as good as the B-17,” he said of the B-24 on display. “It’s a good airplane but it has narrow wings that took some hits and would make it spin out real easy. The B-17 was more stable. I never wanted to fly the B-24.” 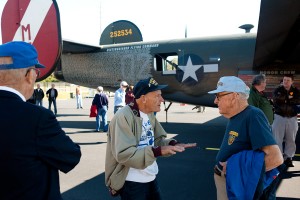 Alex Brast chats with E.W. Bush in front of the B-24 at the Shelby County Airport. (Reporter Photo/Jon Goering)

Hard was part of a group of WWII veteran pilots who toured three restored WWII planes that flew into the airport Friday as part of the Wings of Freedom Tour. The B-24, B-17 and a P-51 Mustang are few of their type still in flying condition left in the world. The planes will be on display at the airport until Nov. 1, allowing visitors to tour and fly in the antique planes.

Joy Dunlap, a WWII veteran pilot from Alabaster, said he had mixed emotions about seeing the planes again. He said he was 21 years old when he flew his B-17 and he lost many friends in those planes.

“After 64 years I got to ride one again and I just lost it,” he said. “It was almost too much for me to be in that plane again where you’re thinking about the things you went through and the people you lost.

“The important thing to me is that it represents the Americans that volunteered to give their life on the line,” he added. “What I represent as a pilot is the people in my crew and all the people who worked so hard on the ground to help us get home safe. Those people were just as important as those that flew the airplanes.” 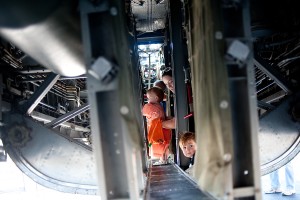 Katherine Robinson checks out the B-24 with her children, Tripp, 3, and Rushton, 1, on Oct. 29 at the Shelby County Airport. (Reporter Photo/Jon Goering)

Ninety-year-old veteran Alex Brast had several near-fatal crashes while flying his B-26 “widowmaker” in the war. His twin brother died while riding in a B-24 similar to the one on display at the airport, but Brast said he still couldn’t miss the opportunity to see the planes again.

“This is something I wouldn’t turn down,” he said.

Dunlap said having the planes on display for the public to see is a way for the history of WWII to live on.

“We need to continue the history of what WWII was about,” he said. “This draws people out and they get to see what it was like in the 1940s.”

This is the second year the Wings of Freedom Tour has come to the Shelby County Airport, said Terry Franklin, supervisor of airport services. He said the tour gives exposure to the airport as well as the important history of the planes.

“It’s a neat piece of history and I know it means a lot for the veterans,” he said. “It’s good for people to learn about the history. These planes won the war for us. My dad always said, ‘They’re the reason we’re not speaking Japanese.’”