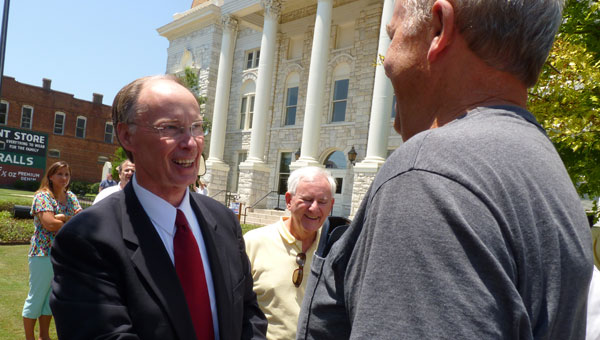 Dr. Robert Bentley shakes hands of supporters in front of the Shelby County Courthouse in Columbiana.

COLUMBIANA — Robert Bentley spent his childhood like many others in Columbiana, fishing on his father’s pond, playing baseball with his cousins and singing in the youth choir at church. He comes from a large and close-knit family, many of whom still live in Shelby County. Though the Republican gubernatorial candidate may not yet know if he’s won the election, his family said either way they couldn’t be more proud of the local Shelby County boy.

Bentley grew up in Columbiana with his father, mother and four older siblings, first in a house off Carter Lane and later on North Main.

Bentley said he’d always remember where he came from in Columbiana.

Bentley’s nephew David Nolen said he has many memories of growing up with his uncle, who was only seven years older than him.

“While he was my uncle, we were close enough in age that he was kind of like an older brother to me,” Nolen said.

Nolen said he remembers spending time with Bentley at his grandfather’s house, where they would often play baseball or go fishing.

“Quite often on Sunday after church we would head out there for picnics,” Nolen said. “My grandfather built a lake for fishing and things so we spent a lot of time there. I spent a lot of time at my grandparents’ and he never missed an opportunity to pick on me. In a loving way of course.”

Nolen said he’ll never forget when Bentley became a teenager he was no longer interested in baseball cards, so he gave his collection to Nolen.  Nolen said he still has that collection along with his own.

Bentley’s cousin Homer Joiner still lives in Columbiana and said he mostly remembers Bentley singing in the choir at the family’s church.

“We were just normal country folk,” he said. “I do remember he was very outgoing and very dependable. What he told you was fact.”

Joiner’s wife, Barbara Joiner, taught Bentley at Shelby County High School both on the debate team and when he was president of the student council.  She said Bentley and his cousin, Sharon, won the debate state championship and both received scholarships to the University of Alabama.

Barbara said she’s sure Bentley has used some of his debate and speaking skills he learned in Columbiana in his gubernatorial campaign.

“He’s the same Robert he’s always been,” she said. “He’s kept his cool as the debate has heated up between him and his opponent. He said he wouldn’t run a negative campaign and he stayed true to that.”

Nolen said Bentley has stayed close with his Columbiana family and often returns for family reunions and holiday celebrations. When he decided to get into politics, he ran it past several members of his family first, Nolen said.

“There was no doubt in my mind that his interests would lead him to go into politics,” she said

Nolen said the family is proud of Bentley and has been supportive during his campaign.

“One of my cousins was talking to me about his campaign and said ‘This is going to mess up our family reunions,’” Nolen said. “I said, ‘We’re just going to have to have one in the governor’s mansion.’”

“From our standpoint, one of the hardest things is to read and hear things about him that his opponents may have said that we, as a family, know is not true,” he added. “We just have to know it’s all part of the political process.”

If Bentley wins the election, he will be the second governor to come from Shelby County. Bentley said he’d be proud to represent the county and Columbiana.

“You never forget your roots and I have never forgotten the teachers and Sunday school teachers that I had in Columbiana,” he said. “I know my mom and dad would be so proud of me and I know how proud they would be if I became the next governor.”

RIVERCHASE — Construction is under way at Riverchase United Methodist Church, which is in the process of expanding to meet... read more