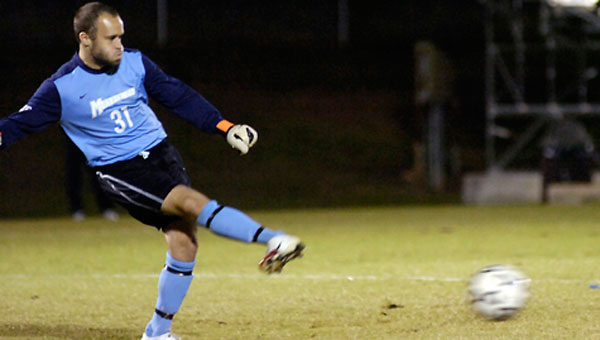 The University of Montevallo men’s soccer team wrapped up a record-setting regular season Oct. 30 and begins its postseason journey Nov. 2 at home against Francis Marion University in the opening round of the Peach Belt Conference tournament.

Montevallo won its 15th match of the regular season following the victory over Concordia, which tied the school’s all-time record for most regular season victories in a year.

Junior Phil Jackson provided the game-winning goal while also dishing out a pair of assists in the 4-1 win.

The Falcons struck first just 2:36 into the match as Pelletier slid a ball up to Pualic, who slotted it past the keeper for a 1-0 lead.

Both teams went scoreless for the next 34 minutes. The Hornets tied the game up in the 37th minute as they crossed a ball into the box that was headed in by Troy Bachus. The game went into halftime tied 1-1.

Esser started the match in goal and made two saves while allowing one goal. He played 45 minutes and entered the game later as a forward.

In the second half, Land took over in goal and made two saves while holding Concordia scoreless. Land took home the victory, which was the second of his career.

Jackson scored the game-winner just 10 minutes into the second half as Montevallo was awarded a penalty kick which he buried into the back of the net.

Just over 14 minutes later the Falcons were awarded a corner kick, which Jackson sent into the box. Foster found the ball with his head and sent it past the diving keeper to give the Falcons a 3-1 lead.

Just under two minutes later the Jackson and Foster show continued as Jackson sent a throughball past the defense, which Foster collected and sent past the keeper for the Falcons’ final goal.

McIntosh led Montevallo with a goal and an assist in the Falcons’ 5-0 win over Tusculum.

Jackson picked up the game-winning goal just 10:30 into the game.

Montevallo broke through early in the game, as McIntosh crossed the ball to Jackson who blasted a shot from 15-yards out to give the Falcons a 1-0 lead just 10:30 into the first half.

Just under three minutes later, Pualic fed the ball through to Foster, who went one-on-one with the keeper and fired a shot into goal to give Montevallo a 2-0 lead.

With just 32 seconds left in the first half, Steer stole the ball from the Tusculum defense and made a couple moves before firing the ball past the diving keeper to give the Falcons a 3-0 lead heading into halftime.

Just 16 minutes into the second half, Pelletier found McIntosh open in front of the goal. McIntosh collected the ball and sent it into the empty net for a 4-0 lead.

Junior Vance Curro, a former Spain Park standout, scored the Falcons’ final goal 64 minutes into the game as Pualic picked up his second assist of the match. Pualic crossed the ball into the box and Curro blasted it past the diving keeper for a 5-0 lead.

Freshman Brendan Ledgeway and Esser combined for the shutout despite neither making a save.

The University of Montevallo women’s soccer team split a pair of matches in the final week of the regular season.

The Falcons (6-10-2) will travel to the University of North Carolina in Pembroke for a first-round contest in the Peach Belt Conference tournament Nov. 2.

Montevallo secured its fourth Peach Belt Conference victory of the season with a 1-0 win Oct. 30 over visiting Georgia College and State University.

Freshman Taylor Kerr provided the lone goal, which gave the Falcons the victory. Kerr received a pass from sophomore Paige Scott and blasted a shot past the Bobcat keeper with just under 10 minutes to play in the first half.

Sophomore goalkeeper Alyssa Maxwell made six saves in the shutout victory. Maxwell’s record improved to 6-8 on the season and the win marked her third shutout of the year.

The Falcons fell in a tough 4-2 match Oct. 27 to Columbus State University, which entered the contest ranked No. 11 in the latest National Soccer Coaches of Association Division II poll.

Stephanie Lowery fired a shot past the diving Montevallo keeper to give the Cougars a 1-0 lead in the first half.

Just under six minutes later Palsdottir sent a long pass up to freshman Taylor Kerr, who slid the ball over to Prince who shot the ball into an empty net. Kerr was able to take on the defense and keeper, allowing Prince the open net for the equalizer.

K.C. MacEachern gave the Cougars a 2-1 lead after she finished a cross from Lowery.

It took just more than four minutes for the Falcons to respond, as Palsdottir used a 30-yard free kick to score the Falcons’ second goal. Palsdottir sent the ball over the four-person wall and over the outstretched hands of the Columbus State keeper to pick up her fifth goal of the season.

Columbus State added two goals in the second half. Maxwell ended the game with five saves.

Montevallo won both matches with the players wearing pink ribbons, pink socks and pink prewrap. The team also had a table set up for donations and also sold T-shirts, baked goods, pink pom-poms and pink bracelets. All money raised will be donated to the Breast Cancer Research Foundation of Alabama.

In the match against UNC Pembroke, freshman Taylor Chapman led the Falcons with 14 kills, nine digs and two blocks.

Ati was the only other Falcon with double-digit kills as she had 10. Ati also had a team-high six blocks, four service aces and a .571 hitting percentage.

Ati led the Montevallo with 16 kills and eight blocks in the match against Stillman. Ati had a season-high .727 hitting percentage as she had 22 attempts with zero errors.

Chapman was the only other Falcon with double-digit kills with 10.

Montevallo was led by senior Dowd, who had 10 kills, 10 digs, six blocks and a team-high .474 hitting percentage.

Carle also had 10 kills to go along with five blocks. Garrison picked up her 17th double-double of the season with 40 assists and a team-high 21 digs.

She currently sits fifth in the the Falcons’ record book against NCAA competition. Currently, Wilson is averaging 4.56 digs per set, which is 0.85 above the career record held by Montevallo Hall of Fame member Gabi Raposo.

Ati led the way with 20 kills and six blocks in the win over West Alabama. Sophomore Virginia Clay added 17 kills.

Chapman finished third on the team with 13 kills and picked up a double-double with 10 digs. The final Falcon with double-digit kills was Carle, who had 11 kills, four digs and four blocks.

Garrison picked up her 16th double-double of the season with 57 assists to go with her 16 digs.

Dowd came up just short of a double-double with nine kills and 12 digs.

The Falcons carded a team score of 674 at the event.

Senior Emily Gibson led Montevallo with a two-round total of 16-over par 160, which placed her in a four-way tie for 14th overall in individual standings.

Tracey Marshall fired a 26-over par 170 to finish 51st in individual standings.

The University of Montevallo announced its 2011 baseball schedule Oct. 27.

The Falcons have 50 contests, including 27 home games at Kermit A. Johnson Field. Montevallo will play 15 games against opponents ranked in the top 25 in the final 2010 Collegiate Baseball Magazine NCAA Division II poll, including 2010 NCAA Division II Champion Southern Indiana University.

The Falcons open up the season Feb. 1 on the road at the University of West Florida. The Falcons first home contest comes Feb. 4 as the Falcons take on Young Harris College.

Columbus State will be the first ranked PBC school the Falcons play March 12-13 on the road. After a single non-conference game with West Alabama on March 16, the Falcons welcome No. 21 North Georgia to campus for a three-game series March 18-19.

Montevallo will face No. 3 Georgia College and State on April 16-17 in Milledgeville, Ga. The Falcons close out the regular season with a five-game home stand against West Alabama and Tusculum on April 27, 30 and May 1.

The Falcons’ held their annual Purple and Gold Fall World Series on Oct. 28-29.

Coleman, a forward from Tampa, Fla., was one of just five men’s basketball players in the Peach Belt Conference selected for this honor.

Coleman started in 31 of the Falcons’ 33 games last season, averaging 11.4 points and 6.3 rebounds per game. Coleman was also second on the team in blocks and fourth in free-throw shooting percentage.

Coleman was named to the University of West Florida Thanksgiving Classic All-Tournament team and was a key part of a Montevallo team that spent most of the 2009-2010 season ranked in the top 25. Coleman also helped the Falcons advance to the championship game of both the PBC Tournament and the NCAA Southeast Region tournament.

The Falcons open up the 2010-2011 season with an exhibition contest at Division I University of Louisiana-Lafayette on Nov. 9 at 7:07 p.m. Montevallo opens the regular season at home Nov. 13 at 7:30 p.m. against Carver Bible College.