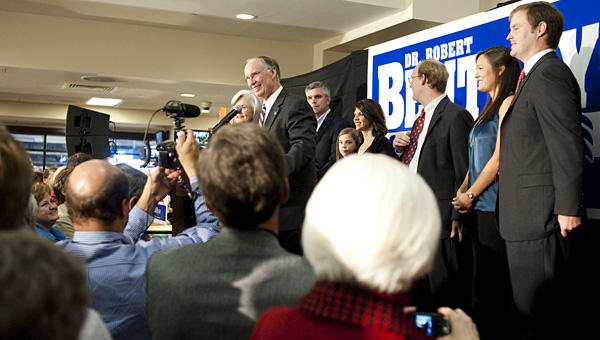 TUSCALOOSA —Robert Bentley entered the lobby of his election party Nov. 2 to the lingering twangs of “Sweet Home Alabama” as a crowd of family, friends and supporters burst into applause for the new Alabama governor.

Bentley took to the stage at The Zone in Bryant-Denny stadium briefly after 10 p.m. only moments after Democratic candidate Ron Sparks was broadcast conceding the gubernatorial race. 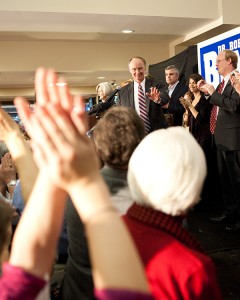 Bentley said he’s ready to start work first thing in the morning to start tackling the problems facing the state.

“I want to give the people of Alabama hope because life should have hope,” he said. “We’re going to do what’s right for this state, we’re going to work together and we’re going to get through these problems.” 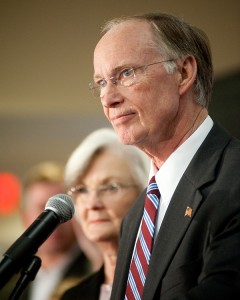 Alabama governor Dr. Robert Bentley smiles out at the crowd during a victory speech following Tuesday's election results. Bentley said he was going to have a 12-hour victory period before getting to work at 8 a.m. Wednesday. (Reporter Photo/Jon Goering)

As Bentley thanked his immediate family who stood on stage with him, several local Columbiana family members watched from the crowd.

Shelby County Commissioner Corley Ellis and Rux Bentley, both Bentley’s cousins, were just two of his relatives that made the drive from Shelby County.

“When you run in an election, the people that know you best support you,” Ellis said. “He’s got a tremendous reputation in Columbiana and Tuscaloosa for honesty and integrity. They know they can trust him. He’ll be a tremendous asset to the state.

“His win is a big day in Shelby County but an even bigger day for the state,” he added. “We know what we’re getting with Robert Bentley, but they’re in for a wonderful surprise.”

Bentley’s nephew David Nolen also attended the election party with family members, and watched with a smile when Bentley was announced governor.

“Listening to him talk up there, it’s strange because he’s still just the same Robert to us,” he said. “But it was a great moment to have him up there.”