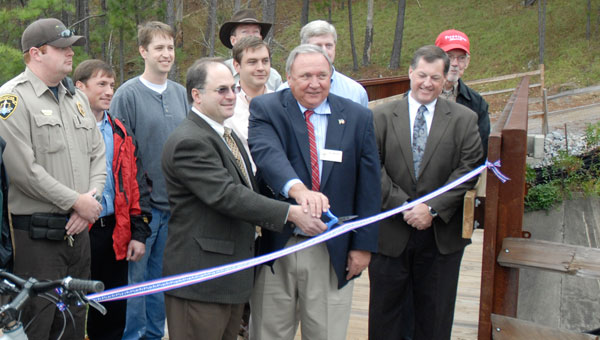 When crews finished installing the small metal bridge over the Double Oak Lake spillway at Oak Mountain State Park in Pelham last June, the project symbolized much more than a stretch of steel, concrete and wood.

The bridge connected two sides of the park’s Lake Trail, which were previously separated by the deep concrete spillway. When connected, the two trails became a single span, and helped the park’s mountain bike trail system stretch more than 22 miles.

And now, the system will forever be known as one of the best in the world.

On Nov. 2, the International Mountain Bike Association named the system to its exclusive Epic trail list, which includes only 52 trails worldwide.

In order to be declared Epic, trails must include engaged land managers, skilled trail builders, community involvement and dedicated volunteers, according to IMBA.

“This represents nearly four years of cooperative work on behalf of many people,” Mark Richman, a member of the Birmingham Urban Mountain Peddlers, said during the bridge’s dedication ceremony Nov. 3.

BUMP began fundraising for the bridge project in 2007, but was unable to pay for its installation until Pelham obtained a $100,000 Recreational Trails Program grant in 2009, Richman said.

“BUMP started raising funds, but fell short. After that, we worked with the city to pursue the grant,” he said. “Getting over the spillway was a major obstacle for this project. Without the bridge, we would have never been able to finish the trail.”

The Lake Trail is a low-intensity course, and is designed for entry-level riders, Richman said.

“This trail doesn’t have a whole lot of climbing on it,” Richman said. “And it allows you to access this (north) side of the lake, where you can really get a good panoramic view.”

“I think this will help to make our city a destination city. We are excited and glad it’s here,” Pelham Mayor Don Murphy said of the bridge.

This will bring a lot of tourism to the city of Pelham,” Murphy added. “They will stay in Pelham hotels and eat at Pelham restaurants.”

Being declared an Epic trail gives Pelham and the state park international recognition in the mountain bike community, Richman said.

“This has paved the way for us to take the world stage of mountain bike tourism,” Richman said.

Mary Sue McClurkin embraces her son, Daniel, at her Pelham residence after she was declared the winner of the Alabama... read more