Chelsea falls to Cullman in playoffs 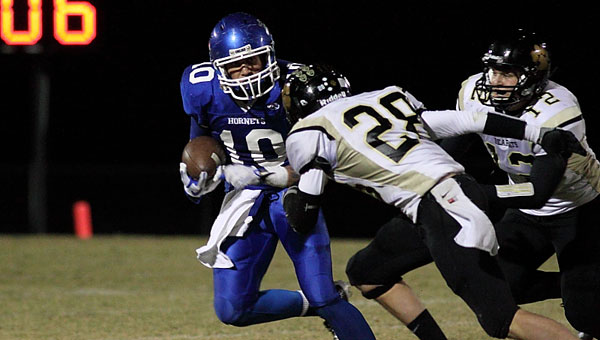 CHELSEA — Several costly turnovers plagued the Chelsea High School Hornets Nov. 5, as they fell 14-7 to the visiting Cullman Bearcats in the first round of the Alabama High School Athletic Association Class 5A playoffs.

“You just can’t come to a playoff game and make that many mistakes,” said Chelsea head coach Wade Waldrop. “And when you’re playing a good team like Cullman, those mistakes are magnified.

“We certainly had several chances to turn it around,” Waldrop added.

After Cullman forced Chelsea to punt on its first possession of the game, the Bearcats fumbled on the Chelsea 2-yard line.

Chelsea (8-3) was forced to punt on its second drive, and Cullman drove 37 yards to the Chelsea 11-yard line, but missed a 27-yard field goal attempt.

Early in the second quarter, Chelsea fumbled the ball on the Cullman 31-yard line, setting up a Bearcat scoring drive capped off by a 19-yard touchdown run by Benjamin Moore.

With Cullman leading by 7, Chelsea drove to the Bearcat 27-yard line on its next drive, but fumbled the ball into the waiting hands of a Cullman defender, who returned the ball to the Cullman 40-yard line.

A penalty set the Bearcats to work at their own 39-yard line, where Moore broke free for a 61-yard touchdown run, giving Cullman a 14-0 lead with 1:13 left in the opening half.

On its second possession of the third quarter, Chelsea capped off an 80-yard scoring drive on a 1-yard Jake Ganus touchdown run. Ashley Page’s extra point brought the game to 14-7.

On its next drive, Chelsea drove 60 yards to the Cullman 8-yard line, but a Hornet fumble was recovered by the Bearcats on their own 9-yard line.

After forcing the Bearcats to punt on their next possession, Chelsea drove 15 yards in one play to their own 47-yard line, but again fumbled the ball away to Cullman.

The Hornets again forced the Bearcats to punt, giving Chelsea the ball with 4:49 left in the game.

Chelsea drove 56 yards to the Cullman 24-yard line, where the Bearcats forced the Hornets to attempt a fourth-down conversion.

During the attempt, Ganus’ pass was intercepted and returned to the Chelsea 20-yard line, where Cullman kneed the ball to seal the win.

“Our guys showed a lot of effort tonight,” Waldrop said. “We expected to get to the playoffs this year, and our guys have worked that way and prepped that way all year.”