Fifth-graders learn about teaching by helping second-graders with math

Allison Hobbs teaches a fourth- and fifth-grade class at Wilsonville Elementary School. This year the class has been utilizing the techniques from AMSTI (Alabama Math Science Technology Initiative.)

“Wilsonville Elementary faculty has been focusing on collaboration among grade level partners for a while now. This is lateral collaboration because we are working with another teacher in another grade,” Hobbs said.

The second-graders have begun to use a method for math that fifth-graders have been working on. Laura McKeller and Christy Miskelly each have a class of second graders that Hobbs’ class will be collaborating with.

Currently the fifth grade comes in and teaches a small lesson to the other classes and spends time partnering up with two or three second-graders to provide individual teaching as well.

“Children tend to pick up a new concept when they see or hear it explained by another child because they can understand the reasoning and explanation,” the teachers said.

This concept also builds competence and confidence within the fifth-grade students as they reiterate what they have learned to the younger students.

“This gives the fifth-graders a feeling of satisfaction to know they have helped others and to know they are smart enough to be able to teach other students,” Hobbs said.

The method of math they are teaching is called the ICEE Method. They use it to solve addition, subtraction, multiplication and division word problems. It stands for illustrate, calculate, explain and extend. Through illustration the students must show their work and even draw pictures to go with the work. As they calculate they solve the math problem, and then they must explain how they got that answer as their solution. Finally, extend reminds them to either go back and check their work, or for more complex math, go on to answer the next part for that particular problem.

Learning to work through the ICEE Method will help all the students prepare for the ARMT (Alabama Reading and Math) test they will do later on this year.

After Ms. Hobbs’ fifth-grade students grade the responses of the second graders, they get back to them and share their progress with them while explaining the parts which were not understood.

“This activity should help the second-graders to be able to apply the ICEE method with greater ease because they are seeing a student from another grade level that has been applying this strategy to their math,” she said. 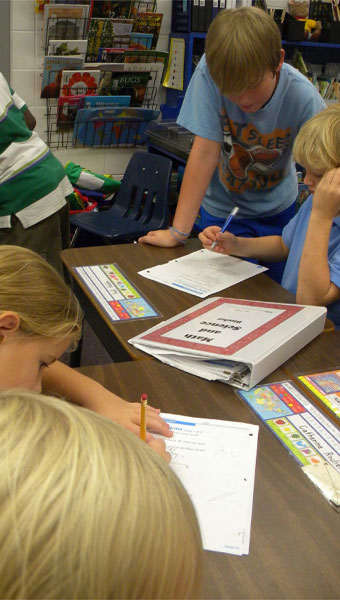