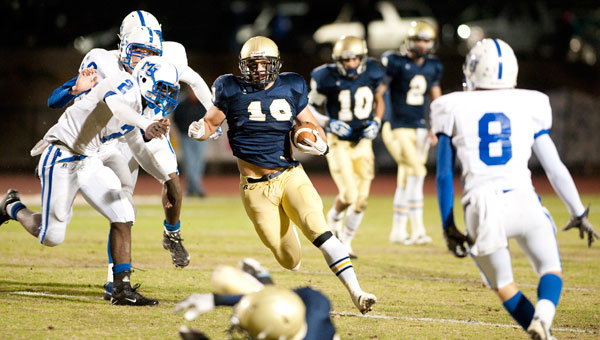 Briarwood Christian School senior running back Sam Whitaker looks for an opening in the Mortimer Jordan defense in the Lions' 38-0 win over the Blue Devils in the first round of the Alabama High School Athletic Association Class 5A playoffs Nov. 5. (Reporter Photo/Jon Goering)

The Lions entered the contest without three of their starters in defensive lineman Jake Whaley and defensive backs Cooper Harrington and Kalan Reed — all of whom suffered season-ending injuries during the regular season.

The end result suggested Yancey didn’t have anything to worry about.

Briarwood’s new-face defense suffocated the Blue Devils and allowed just 145 yards of total offense, as the Lions rolled to a 38-0 shutout win Nov. 5 at Lion Pride Stadium to advance to the second round of the Alabama High School Athletic Association Class 5A playoffs. 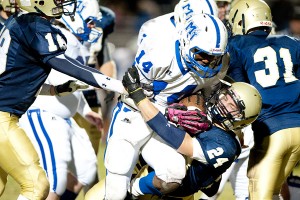 “It concerned me because over the course of the year, I’ve got four really good defensive football players out, so we’re filling in,” Yancey said. “You give credit whenever these kids step up and it’s their turn. They know how to play, and it encourages me to see how these other boys step up and do their job well.”

The defense made things difficult for the Mortimer Jordan offense throughout the game and lived in the Blue Devils’ backfield, registering eight sacks and yielding less than 100 yards rushing.

The Blue Devils didn’t record a first down until their first possession of the second quarter.

“I’m really proud of how we played tonight,” defensive end Caleb Ward said. “We were able to make moves, and we were able to get back there (in the backfield) and make things happen. We knew we had to take care of business tonight.”

Yancey credited multiple bodies along the defensive front for much of the production.

“We played real fast and quick,” Yancey said. “We have depth in the defensive line as far as kids that can play their positions.”

Briarwood took advantage of the defense’s stellar play early on, as the Lions’ offense got on the scoreboard first after starting three of its first four drives inside Blue Devil territory. 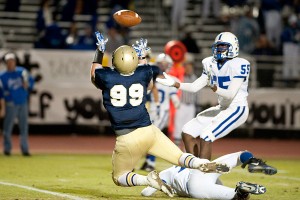 Quarterback Ben Craft capped the Lions’ first scoring drive of the game with a 5-yard run off the right side give Briarwood an early 7-0 lead with 5:06 left in the first quarter.

Craft finished the game with negative two yards rushing on five carries with a score. The junior also completed 11-of-20 passes for 112 yards with two touchdowns and an interception. 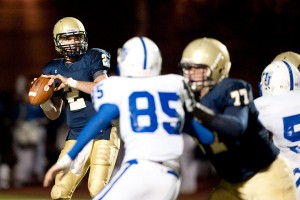 The Lions drove 30 yards on their next possession and tacked on a 27-yard Wilson Whorton field goal with 7 seconds left in the opening frame to claim a 10-0 lead.

The Briarwood offense was set up with prime field position once again on its first possession of the second quarter after Roy Gilbert blocked a Blue Devil punt, giving the Lions the ball at the Mortimer Jordan 23-yard line.

Three plays later, running back Sam Whitaker, who had a game-high 129 yards on 16 carries and two touchdowns, found the end zone from 6 yards out for his first touchdown with 10:07 remaining in the second quarter to give the Lions a 17-0 halftime lead.

Orion Recke went 11-for-21 for 109 yards and an interception to lead the Blue Devils, who finished their season at 5-6. Junior tailback Marquis Dobbs ran for 73 yards on 18 carries and hauled in two passes for 14 yards.

Briarwood will face Walker High School Nov. 12 in a matchup of 10-1 teams. Yancey said the Vikings will present a new set of challenges.

“They beat a team that we know is really good in Sylacauga,” Yancey said. “We know we’ve got a lot of work cut out for us this week to get ready for that bunch. They’re tough.”

Chelsea falls to Cullman in playoffs