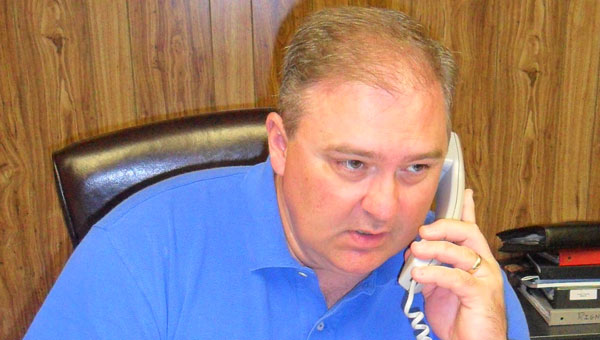 Curtis Rigney has been serving with the Alabaster Police Department since 1991, and has worked his way up to the rank of deputy chief.

For 20 years, Curtis Rigney has been a recognized name in Alabaster.

As deputy chief, he is second in command to our Police Chief Stanley Oliver.

Educated in Hoover at what was then Berry High School, Rigney continued his education at Marion Military Institute earning an associate degree. Next he was off to the University of Alabama to get his criminal justice degree in 1986.

For a while, he was in the family business with his father. Job offers do not come out of the woodwork for men and women who seek a career as a “lawman.” Rigney began his climb as a reserve deputy with the county (no pay, furnish own equipment and ride with a seasoned deputy every other weekend.) This “reserve business” goes a long way in getting recognized and getting your foot in the door someplace.

Hired by Alabaster in 1991, Rigney was a patrolman for six years and an undercover narcotics agent for two years.

After being promoted to detective in the Criminal Division, making sergeant and the lieutenant, he was in his element. Criminal investigation, working the cases from beginning to end and hopefully seeing justice served made his job rewarding.

Since 2003, his title has been deputy chief. He oversees operations, patrols, administration, criminal investigations, press events, other media needs and public information.

Rigney has a 21-year-old son, Ryan, who is a senior at the University of Alabama. Rigney and his wife LeAnn are proud parents of twins Conner and Cole, both adopted from Russia.

When asked his favorite place to “just be,” Rigney quickly said Seagrove, Fla. As far as traveling, he and wife LeAnn have already been on an extended tour of England, France, Germany, Austria, Italy, Switzerland, the Netherlands and Russia. A family trip to the Rocky Mountains and surrounding areas would be great, he said.

Twenty years from now, Rigney hopes to be remembered for serving his community well, helping people and doing a good job.

Deer hunting and quality time with his wife is something he looks forward to. He said, “LeAnn is my best friend. She completes and supports me.”