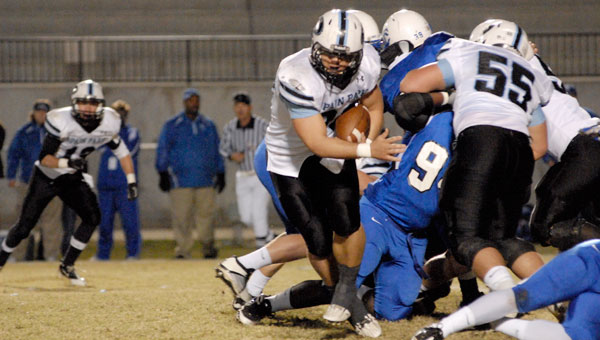 Spain Park High School senior running back Steven Silvio breaks away from a pack of Tuscaloosa County defenders in the Jaguars' 35-13 win over the Wildcats in the first round of the Alabama High School Athletic Association Class 6A playoffs Nov. 5. (Reporter Photo/Wesley Hallman)

NORTHPORT — Spain Park High School senior Alex Payne remembered the feeling he had walking onto the field at Buccaneer Stadium with a cast on his wrist before the winless Jaguars took on rival Hoover in the second week of the season.

Payne, who missed a majority of the regular season including the Hoover game with a broken bone in his hand, felt like a completely different Spain Park team headed into the locker room following a 35-13 win on the road at Tuscaloosa County in the first round of the Alabama High School Athletic Association Class 6A playoffs Nov. 5.

Payne and the Jaguars (6-5) will get another shot at the Bucs, who defeated Spain Park 44-0 in their regular-season meeting in Class 6A, Region 6 play, in the second round of the Class 6A playoffs Nov. 12 at Regions Park.

Interim head coach Ben Berguson said the Jaguars will enter the second meeting with Hoover in a much different mindset.

“It’s really amazing what this team has accomplished,” Berguson said.

Coming off a loss to Clay-Chalkville in their final regular season game, the Jaguars wasted no time putting the setback behind them.

Sophomore quarterback Nick Mullens completed 21-of-34 passes for 298 yards and four touchdowns without an interception.

Berguson praised the trio following an impressive showing in the playoff win.

“Zak did a great job and Reid had a huge night,” Berguson said. “And Nick Mullens has grown up so much over the last 10 weeks. He’s gotten better every week.”

Following a missed field goal on its first offensive possession and punt on its second drive, Spain Park put the its first points on the scoreboard following a 74-yard bomb from Mullens to Reinagel with 47 seconds remaining in the first quarter. Jake Hoffman added the extra point to give the Jaguars an early 7-0 lead.

Mullens completed 3-of-4 passes on a scoring drive midway through the second quarter, which was capped by a 3-yard touchdown run by Alex Roberson, to push the lead to 14-0 following Hoffman’s extra point with 7:51 remaining in the first half.

Tuscaloosa County scored its first touchdown on the ground with 1:43 left in the first half. The Jaguars blocked the point-after attempt to take a 14-6 lead into the locker room at halftime.

Mullens completed 9-of-14 passes for 165 yards in the first half. Reinagel had five catches for 132 yards in the opening half.

Spain Park capped its first drive of the second half with a 16-yard touchdown strike from Mullens to Michael to push its lead to 21-6 following Hoffman’s extra point with 9:27 left in the third quarter.

The Jaguars missed another field-goal attempt in the third quarter and Tuscaloosa County scored a touchdown through the air late in the quarter to cut the lead to 21-13.

Despite the outcome in the playoff meeting with Hoover, Payne said he will have great memories from his adversity-filled senior season.

“The coaches never gave up on us,” Payne said. “I’m so proud of this team. I love everyone out here.”

Briarwood Christian School senior running back Sam Whitaker looks for an opening in the Mortimer Jordan defense in the Lions'... read more