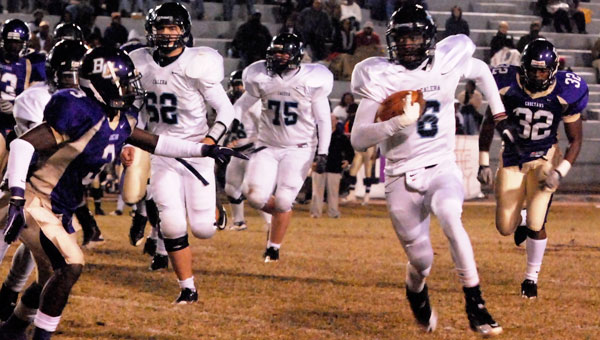 Calera High School senior quarterback Brandon Wells looks for an opening in the Bibb County defense in the Eagles' 28-6 loss to the Choctaws in the first round of the Alabama High School Athletic Association Class 4A playoffs Nov. 5. (Contributed/Kristi Ingram)

Calera High School football coach Scott Martin gave his team a little perspective before a meeting with one of the best teams in the state in the first round of the Alabama High School Athletic Association Class 4A playoffs Nov. 5.

Martin reminded the Eagles to stay loose before they took the field on the road at Bibb County in their playoff opener.

Calera went toe-to-toe with the Choctaws for three and a half quarters before Bibb County escaped with a 28-6 win over the Eagles.

“I told our guys there was no pressure going in,” Martin said. “Pressure is what we had to get to the playoffs. Winning our final three region games to get in the playoffs, that was pressure.”

Senior quarterback Brandon Wells led the Eagles (6-5) in his final game at Calera.

Wells rushed for 105 yards, including a 20-yard touchdown run for the Eagles’ only score in the game, on 12 carries. Wells also completed 16-of-31 passes for 122 yards with three interceptions.

Bibb County scored a rushing touchdown in the second quarter to take a 6-0 lead into the locker room at halftime.

Calera responded with Wells’ 20-yard touchdown run in the third quarter to tie the game at 6-6.

Bibb County scored a touchdown late in the third quarter and added two more scores in the fourth quarter to seal the win.

“It was 14-6 with five minutes to go,” Martin said. “We just didn’t execute. We knew we would have to play a near-perfect game to have a chance to win. I thought we played well enough on defense to win.”

Spain Park High School senior running back Steven Silvio breaks away from a pack of Tuscaloosa County defenders in the... read more