Rebels blow out Chambers in playoffs 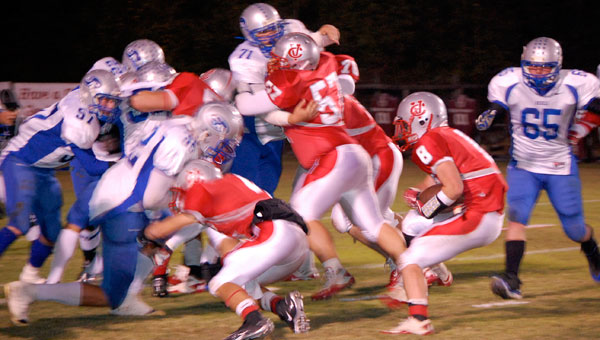 Coosa Valley Academy running back Bryce Cook follows his blockers in the Rebels' 39-12 win over Chambers Academy in the first round of the Alabama Independent Schools Association Class 1A playoffs Nov. 5. (Reporter Photo/Steven Kilpatrick)

HARPERSVILLE — On a chilly night in the first round of the Alabama Independent Schools Association Class 1A playoffs Nov. 5, the Coosa Valley Academy Rebels blew out the visiting Chambers Academy Rebels 39-12 to move on to the second round of the playoffs.

Both teams opened up the game by forcing punts on their first drives.

Chambers Academy forced a fumble on Coosa Valley’s second drive and turned it in to six points to take its first lead of the game. Coosa Valley answered back quickly on the first play of the second quarter with a 21-yard touchdown pass from senior quarterback John Bullen to Tanner Wood to tie the game at 6-6.

After giving up a field goal, Coosa Valley (9-2) scored another touchdown to take a 12-9 lead into the locker room at halftime.

Coosa Valley owned the second half on both sides of the ball. The Coosa Valley offense scored on its first two drives of the third quarter, including a 56-yard scoring run by Hunter Winslett and a 29-yard touchdown run by Ryan Batson to take a commanding 14-point lead into the fourth quarter.

“At times we struggled, but it doesn’t matter, we came out with a win,” said Coosa Valley coach Vince DiLorenzo. “I don’t think we will have a problem looking ahead. I am just glad we are playing next Friday.”

Coosa Valley will host Autauga Academy in the second round of the AISA Class 1A playoffs Nov. 12.