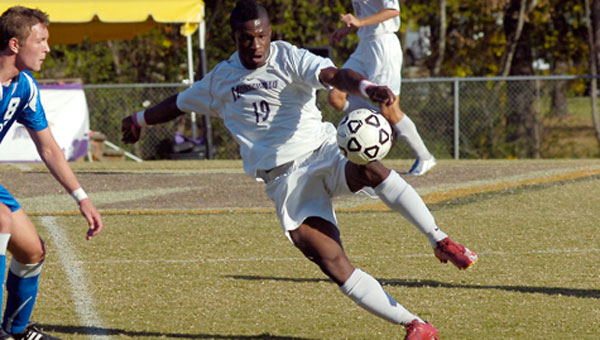 Senior Nathaniel Foster was named the Peach Belt Conference tournament’s most valuable player after scoring five of Montevallo’s seven goals in the tournament, including the game-winner in all three PBC tournament matches. (Contributed)

The Falcons will await the selection show for the 2010 NCAA Division II men’s soccer tournament to find out their destination for postseason play. The selection show will take place Nov. 8 at 6 p.m. on Ncaa.com.

Senior Nathaniel Foster was named the tournament’s most valuable player after scoring five of Montevallo’s seven goals in the tournament, including the game-winner in all three PBC tournament matches.

Foster got the scoring started for the Falcons (18-2-1) in the 27th minute. Foster was fed a ball by senior Daniel Pelletier and found himself one-on-one with the Flagler keeper. Foster slotted the ball in the bottom left corner to give Montevallo a 1-0 lead.

The game went into halftime with the 1-0 score. Just 11 minutes into the second half, Foster once again provided the spark for the Falcons as he streaked down the near sideline and beat the Flagler defense for another one-on-one with the keeper. This time Foster slotted the ball to the right side and gave Montevallo a 2-0 lead.

The Saints responded just four minutes later as Zach Shanahan fired a free kick off the Montevallo keeper, which rebounded to the feet of Pol Berenguer. Berenguer buried the ball into the back of the net to cut the lead to just one goal.

The Montevallo defense held strong for the final 25 minutes to capture the Falcons’ first conference championship since winning a Gulf South Conference title in 2004 and the school’s first in the Peach Belt Conference.

The Falcons took down No. 1 seed Clayton State University (16-3) in the semifinals of the Peach Belt Conference tournament Nov. 5.

Montevallo won 4-3 in a thrilling match. Foster provided two of the Falcons’ goals, including the game-winner.

The Falcons got the action started just 3:41 into the game as senior Alex Ghoja fired a shot from 38 yards out that fund the upper right corner of the net and gave Montevallo a 1-0 lead.

Montevallo made it 2-0 less than 10 minutes later, as Foster picked up his first goal of the game when he finished a cross from senior Milan Pualic. Junior Phil Jackson also recorded an assist on the play.

Down 2-0, the Lakers responded in the 29th minute as Sam Bevan headed in a free kick from Brett Neilson to cut the lead to one goal. Just 29 seconds later Ryan Pugh received a pass from Igor Lukic and shot the ball off a Montevallo defender to tie the game at 2-2.

In one of the quickest goals in school history, Ghoja scored just six seconds after Pugh’s goal to give the Falcons the lead. Foster was credited with an assist on the goal.

Montevallo headed into halftime with a 3-2 lead and up a player as David Duot of Clayton State received his second yellow card of the match just minutes before halftime. Montevallo had two saves in the period, one by freshman goalkeeper Brendan Ledgeway and the other by a defender.

Clayton State’s keeper Brian Garcia made one stop in the first half while allowing three goals.

The second half had much less fire power than the first as both teams settled into the game. Foster sent in the game-winner just five minutes into the period as he found himself one-on-one with the goalkeeper after a Clayton State turnover.

Just 12 minutes later, the Lakers cut the lead to one goal as Rhys Jukes scored to make the score 4-3.

Both teams were unable to score in the final 28 minutes of play.

FROM STAFF REPORTS The University of Montevallo men’s basketball team is ranked No. 24 in the National Association of Basketball Coaches Division II preseason poll,... read more