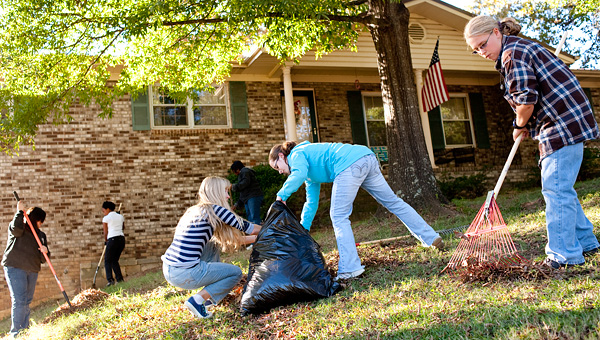 CALERA — Eighty five-year-old Wilburn O. Thomas watched with a smile as a group of seventh- and eighth-graders from Calera High School swarmed his front and back yards Nov. 8 with rakes and trash bags in hand.

The students spent the afternoon learning about Veterans Day first hand by raking leaves and clearing branches for Thomas, who served in WWII when he was 18 years old.

“It makes me realize that time has eaten me up,” Thomas said. “I can remember when I had the vigor they’ve got.”

Seventh grade teacher Joanna Watts said over a two-day span, the students will serve 11 veterans in Calera as a way to show their gratitude for the veterans’ service.

“This way they can recognize veterans in the community that have served the country,” she said. “It’s a way for them to give back and show their appreciation.”

Thomas, a recent widower, helped the students as they tackled the projects he had prepared for them in his yard. Tears came to his eyes as he spoke of the kindness and positive attitudes of the students.

“It’s overwhelming the feeling I have for the school, the teachers and the students,” he said. “It makes me feel like I’m someone big when I know I’m not. I’m just an average citizen. I don’t feel like I deserve it. The real heroes are still over there or were shipped home to their families. The rest of us just done what we could and came home safe.

“I appreciate the thoughtfulness and the gratitude they showed me,” he added about the students’ work. “I don’t feel people are obligated to me. That was just part of my life. I went to war and then I came back. I felt like it was my responsibility to fill a slot and I filled that spot to the best of my ability.” 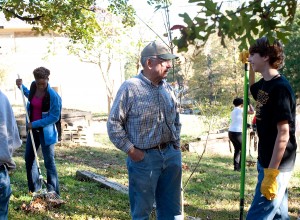 WWII veteran Wilburn O. Thomas chats with Calera High ninth-grader Noah Petersen, one of the students who came to his residence Nov. 8 to help out for Veterans Day. (Reporter Photo/Jon Goering)

Seventh grader Savannah Gottier said she enjoyed getting out of the classroom for the day and raking leaves in Thomas’ yard.

“It’s us showing him we respect him and thanking him for serving in the war,” she said. “Doing this is much better than learning about Veterans Day in a classroom.”

Watts said this is the second year the school has organized veteran service projects for the students. She said many of the students were eager to return to Thomas’ house because last year after the work was through, he sat them down on the back porch and told them about his time in the war.

“It was interesting, it was scary, it was depressing,” he said. “You didn’t know from one minute to the next what was going to happen. One minute you’re going wild trying to stay safe and then it’s over. Most of the time it was just a scare, but we did lose several men while we were there.”

Thomas, who was an engineer in the Navy, told the students stories about enduring air raids in fox holes and helping injured soldiers. He said he enjoys passing the stories on to the students.

“I enjoy people asking me questions,” he said. “I love to see young people smile. It’s been a pleasure to have them here.”

Watts said hearing stories from local veterans makes Veterans Day come alive for the students, who often only hear about the war in school.

“They get to meet them and hear their stories,” she said. “You hear about the war in history books, but you don’t get the personal viewpoint that you do when you meet the veterans.”