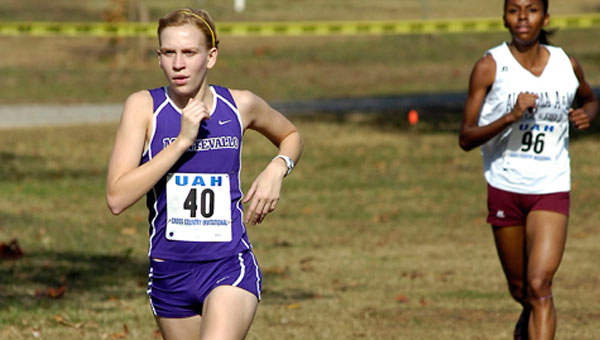 University of Montevallo sophomore Haley Evans finished eighth overall in individual standings at the Peach Belt Conference championship meet, which earned her a spot on the All-Conference team following the meet Nov. 7 in Evans, Ga. (Contributed)

Sophomore Haley Evans finished eighth overall in the 5K individual standings and was named second team All-Conference following the meet.  Evans came across the line with a time of 25:23.00, just three seconds behind the seventh-place runner.

Freshman In-Mi Matsunaga crossed the line with a time of 26:20.30 for a 21st-place finish in individual standings. Junior Katherine Schofield was the next Montevallo finisher at 25th overall. Schofield had a time of 26:29.40.

The Falcons’ final finisher was junior Whtiney Adkins, who finished 40th overall with a time of 27:47.20.

The Falcons were led by freshman Mark McDonald, who ran the 8K course with a time of 27:59.60. McDonald finished in 30th place overall in individual standings.

The Falcons’ final finisher was freshman Evan Brock, who finished 56th overall with a time of 34:04.40.

The Falcons head to the Peach Belt Conference tournament in Savannah, Ga. as the No. 2 seed and will take on the No. 7 seed Francis Marion University in the opening round Nov. 12. Montevallo swept Francis Marion in two regular season meetings.

Freshman Taylor Chapman added a double-double with 15 kills and 10 digs.

Redshirt freshman Manyi Ati led the Falcons with six blocks while adding 12 kills and a team-high two service aces. Senior Rebecca Dowd had a double-double with 11 kills and 17 digs while also having three blocks.

Freshman Michelle Carle was the final Falcon with double-digit kills as she had 10 while also picking up four blocks. Junior setter Anna Garrison had 61 assists and 15 digs for another double-double.

Montevallo extended its winning streak to eight matches with victory over USC-Aiken in a Peach Belt Conference match Nov. 5.

Chapman added another double-double to her resume as she had 11 kills and 14 digs. Ati had 10 kills, a team-high five blocks and three digs.

Wilson led the Falcons with 26 digs, while Garrison added another double-double with 49 assists and 16 digs.

Prior to the match the Falcons honored Dowd and Kara Zawisza, who were playing in the final home match of their career.

Montevallo was led by Clay, who was the only Falcon to reach double-digit kills with 12 kills. Clay also had three blocks.

Garrison had 35 assists and 12 digs for her 20th double-double of the season. Wilson led the Falcons with 16 digs.

Tiffany McClure led the Falcons with 10 points on 3-of-12 shooting from the floor, including 0-of-4 from beyond the arc. McClure, a junior college transfer from Tallahassee Community College, hit 4-of-6 free throws.

The exhibition game was Mechan Vanderpool’s first game as the Falcons’ head coach.

The Falcons open the regular season Nov. 12 on the road at West Georgia.

Five University of Montevallo men’s soccer players and two members of the women’s team were named to the All-Peach Belt Conference team Nov. 5.

Montevallo seniors Nathaniel Foster, Milan Pualic and Austin McIntosh were all named to the men’s All-PBC first team, while freshmen Gary O’Neil and Brendan Ledgeway were named to the second team.