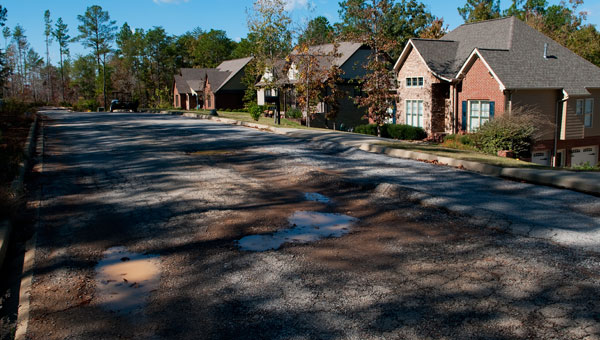 The roads in the Covington Place subdivision in Chelsea are just one example of poor roads in county neighborhoods. (Reporter Photo/Jon Goering)

When Chelsea resident Lynn Lang and her family moved into the Covington Place subdivision about four years ago, they noticed the neighborhood’s single road was beginning to deteriorate.

As each day passed, the road became slightly bumpier, a few more cracks seemed to appear and potholes began to form in the small residential area of about 10 houses.

“When we first moved in here, the developer assured us they were going to fix it soon,” Lang said as she stood on her front porch Nov. 2 and gazed out onto a street some military vehicles would struggle to traverse.

The problem continued to worsen as some sections of the road began sinking into the earth, becoming circles of red mud flanked by buckled asphalt protruding several inches above the road’s surface.

And then one day the neighborhood’s residents returned home to find an unexpected visitor lodged near one of the road’s most damaged sections.

While making its routine collection route, a garbage truck became stuck in the subdivision, where it remained for several days before crews were able to remove it.

Covington Place residents have not had curbside garbage pickup service since.

“The garbage truck no longer comes in our neighborhood. We have to take our trash cans to the entrance of the neighborhood,” Lang said, pointing to a collection of garbage cans placed on Shelby County 49.

“If a kid got hurt or something, I’m afraid the fire truck couldn’t get in here. That really presents a danger,” she added. “It’s a safety concern.”

Across the county, Pelham resident Chuck Kitchen and his family have been dealing with deteriorating roads for about five years.

“It was actually a lot worse than this when we first moved in,” said Kitchen, a resident of the Oaklyn Hills subdivision. “About a year ago, they came in and patched a lot of it up.

“There was a really bad pothole near the entrance of the subdivision that they had to put cones around for a little while,” Kitchen added. “I know someone’s car got knocked out of alignment hitting that thing.”

During a Nov. 8 meeting, the Pelham City Council voted to move forward with repaving streets in Oaklyn Hills.

Years in the making

Kitchen’s and Lang’s stories are not unique to their respective cities. Municipalities across Shelby County have been facing a growing problem for the past several years.

In the early- and mid-2000s, housing developers began flocking to Shelby County, particularly the high-population areas in the northern and western part of the county.

Much like the rest of the country, Shelby County experienced an unprecedented housing boom, in which entire neighborhoods seemed to appear in a matter of days.

When the developers began constructing in a municipality, they obtained permits from the area’s governing body and pledged a certain amount of bond money to ensure the neighborhood’s streets would be brought up to city standards after the subdivision was a certain percent complete.

But as residential construction commenced, the economy began a rapid nosedive as the nation’s housing market began to crumble around 2007.

“What happened was that the developer either became bankrupt or they went away without completing the roads,” said Chelsea Councilman Mike Denton.

Many municipal laws do not allow the city or governing body to accept ownership of a road until the road is brought up to city standards, which usually requires the road to have its final seal coat installed.

However, many of the developers either went bankrupt or cut off communication with the city before completing the roads or the subdivision.

While the roads were suitable to drive on for a while, their lack of a seal coat caused them to become damaged and worn quickly, said Pelham Mayor Don Murphy.

“The longer you let the streets stay there and collect moisture without a seal coat, the worse they get,” Murphy said. “We have got subdivisions that are 10 years old that still need a seal coat. That’s a bad policy.”

When a developer abandons a neighborhood without bringing the roads up to standard, the city is usually left with no choice but to demand the bond money from the developer.

If the developer refuses to surrender the bond money, cities are usually forced to sue them to secure the bond. The legal process can take several months or years, and some cities, by law, are not allowed to perform maintenance on the roads until the case is settled or the developer brings the roads up to city standards.

“If you just rush in and do all this work on the roads, it’s like you’re accepting ownership of those roads. If you do that, you may not be able to get that bond money,” said Alabaster Mayor David Frings, whose city is seeking legal action against several neighborhood developers. “Even though we do go in and do some patching of the roads, in reality, they are not public city roads. There are a lot of legal issues involved.”

Pelham recently settled a lawsuit with the developer of Oaklyn Hills, in which the city received about $103,000 in bond money and eight vacant lots from the subdivision’s bankrupt developer.

“We just got out of a lawsuit we have been in for two years trying to get the money to recoup those repaving costs,” said Pelham City Engineer Jesse Jowers.

With the bond money and the value of the lots signed over to the city, Pelham officials have enough to completely fund the Oaklyn Hills repaving project. However, not all cities are in the same situation.

Because the cost of asphalt and other paving material has increased dramatically since the developers originally put up bonds several years ago, the cities usually do not receive enough money to completely fund the repaving projects when they obtain the bond money from the developer.

“The money is short because the cost of paving material has gone up,” Frings said. “Due to that increase in cost, the city is having to pick up some of that burden, even after we get the bond money.”

“The roads in our residential developments are actually in very good shape right now,” Cole said. “But we do have some county roads that need repair.

“There are gas taxes that are dedicated to our repaving fund, and those have dropped off,” Cole added. “We are able to do less resurfacing than we need.”

But not all struggling developers are intentionally withholding money from the cities or refusing to resurface the roads.

“The last several years, the economy has really taken its toll on developers,” Denton said. “We are in the same spot as communities throughout the Birmingham metro area.

“But most of the developers that we have in our city have been pretty good,” Denton added. “The vast majority of developers are standing by their word and doing what they say they’re going to.”

Kitchen, who works to construct houses throughout the area, said builders and developers are facing dire situations in the economic downturn.

“The builders are really getting the worst of it now,” Kitchen said. “Their subcontractors are constantly going out of business.

“The roads are a big part of the problem when you are trying to sell a house,” Kitchen added. “When you drive in and see a smooth blacktop, the neighborhood looks more attractive right off the bat.”

Mary Roensch, a developer with the Ferris Management Company, said many developers become stuck when they are unable to build on all lots in the subdivisions.

“The economy is terrible, and it’s still affecting developers,” said Roensch, who was recently commended by the Alabaster City Council for repairing roads in the Sterling Gate and Cedar Grove subdivisions. “It’s different in many government entities. Some require different levels of (subdivision) completion before you can complete the roads.

Top model in the making