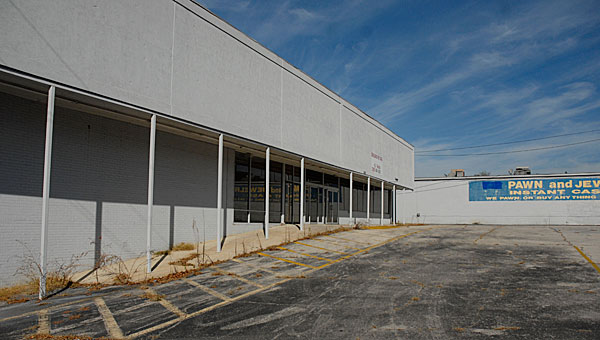 Alabaster Mayor David Frings and some members of the City Council are split on whether or not the city should purchase this building near the America's Thrift Store to use as a temporary city hall. (Reporter Photo/Neal Wagner)

Alabaster Mayor David Frings and some members of the City Council do not see eye-to-eye on the city’s need for a temporary City Hall in a currently vacant building on First Street Southwest.

During the council’s Oct. 21 meeting, it voted 4-3 against purchasing the vacant building, which is near the America’s Thrift Store and across the street from the Razin Kane bar.

It would likely cost the city about $1.3 million to purchase the 50-year-old building and have renovations completed on it, Frings said.

Frings said he was strongly in favor of purchasing the building, and said it was a “missed opportunity” when the council denied the motion.

“Why pay rent on something when you can own it?” Frings added. “It would cost us $1.3 million to own, or we could pay close to that renting these other buildings. We could even turn around and sell the building later if we needed to. You can’t sell something you rent.”

Alabaster currently rents the City Services building on Alabama 119, which houses the city’s building services, revenue and other departments.

The city also uses a building in the Simmsville community as a Police Department satellite office and a spot in the Alabaster Market Center for the department’s detective division. The city does not own the two buildings, but they are provided rent-free to the city by the Alabama Housing Authority and the First Methodist Church of Alabaster, respectively.

When Alabaster City Administrator George Henry originally brought the idea of purchasing the building to Frings, the mayor said he was skeptical of housing many of the city’s departments in a more than 50-year-old building.

“When George brought the idea to me, I was originally against it. I thought it was an old building,” Frings said. “But the (Central State) Bank said they would tear it down to the concrete walls and redo the whole building.

Over the years, the building has been a grocery store, an overstock store, a health club and a haunted house, but has been vacant for several years.

Because the city would have to borrow the $1.3 million to purchase and renovate the building, Moseley said he voted against the motion primarily for financial reasons.

“Going out in this economy and borrowing $1.3 to $1.4 million just isn’t a good idea,” Moseley said. “The numbers we were given just didn’t add up.

“This is not the time to go out and borrow that kind of money. That’s a whole lot of money,” Moseley added. “I don’t think there is any one person in the country who could tell us what the economy is going to do in the next year or two years.”

Alabaster currently owns property off Alabama 119, and Moseley said he would rather save money and use it to one day build a municipal complex on the property.

“We do own property elsewhere, but we are not going to be able to do anything with that for 10 years,” Frings said. “We have needs right now. Yes, we are getting things done, but we could do them more efficiently.”

Mr. and Mrs. David Hampton Holcombe III, of Selma, are pleased to announce the engagement of their daughter, Lindsey Marie... read more