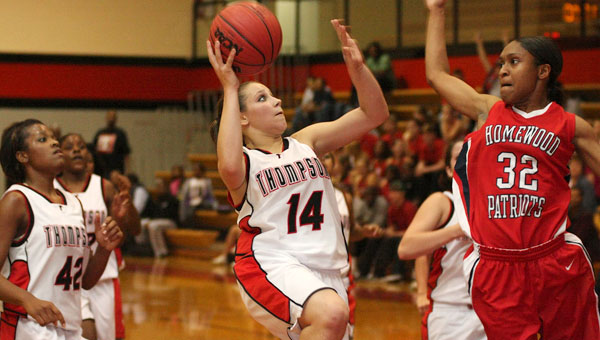 Thompson High School sophomore Kat Cingoranelli drives toward the basket in the Warriors' 51-39 win over Homewood in their season opener Nov. 9. (Contributed/Eric Starling)

ALABASTER — The Thompson High School girls’ basketball team outscored visiting Homewood in all four quarters as the Warriors picked up a 51-39 win in their season opener Nov. 9.

KaDeisha Stowes led Thompson (1-0) with 15 points and 12 rebounds in the victory.

Thompson coach Cara Crosslin was pleased with the Warriors’ effort in their first game of the 2010-2011 season.

“A win is a win and we hope this sets the stage for our season,” Crosslin said. “We were choppy at first, but we settled down and ran our offense as we had practiced it.”

Thompson returns to the court Nov. 16 as the Warriors host McAdory.

Indian Springs (1-0) will face Oak Grove in its next game Nov. 11 in its Tip-Off Tournament.

Indian Springs outscored the Wolves 40-29 in the second half to secure the win.

Charlie Simpson led Indian Springs (1-0) with 20 points in the victory.

The Westminster School at Oak Mountain boys’ basketball team overcame a one-point deficit after the first quarter and coasted to a 59-37 win over host Jefferson Christian Academy in its season opener Nov. 9.