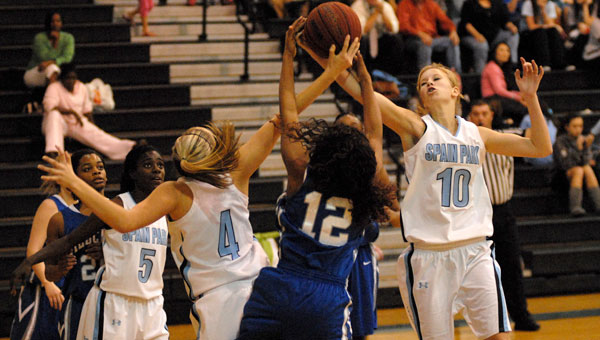 Spain Park High School sophomore Haven Eddy (4) and junior Jessica Freeman (10) battle with a Tuscaloosa County player for control of the ball in the Jaguars' 80-29 win over the Wildcats in their season opener Nov. 9. (Reporter Photo/Davis Potter)

Ashley Gaston and Colby Ryan chipped in 13 points a piece.

Spain Park head coach Michael Chase, who is in his second year at the helm for the Jaguars, said his team’s offseason work translated into first-game success.

“The kids really put in a lot of time in the summer,” Chase said. “We couldn’t pass, dribble, catch, shoot or do a whole lot of that. Because of the time they put in, we’re starting to be able to do some things and look a little bit like a basketball team. I was pretty pleased for a first game.”

Spain Park got out to a fast start, leading 15-4 after the opening quarter. The Jaguars (1-0) continued their momentum in the second quarter, using hot shooting to outscore the Wildcats 31-6 in the frame to take a 46-10 into the locker room at halftime.

Spain Park was also efficient from the free throw line, connecting on 18-of-24 free throws (75 percent).

“We really focused on shooting the outside shot,” Chase said. “We work hard on it. It was nice to see our girls shoot the ball pretty well.”

Spain Park will return to action Nov. 16, as the Jaguars travel to Gadsden City.

FROM STAFF REPORTS The Evangel Christian School girls’ basketball team tipped off its 2010-2011 season with a 74-60 win on... read more