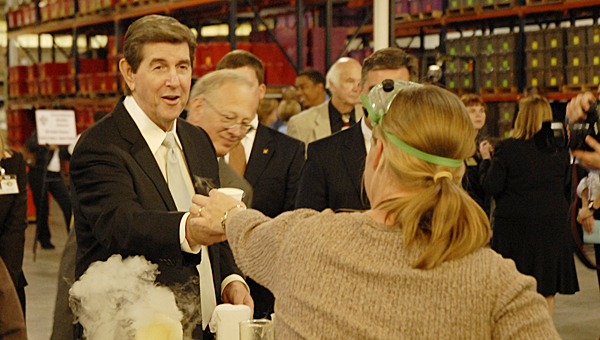 Alabama Gov. Bob Riley helped Shelby County students handle a giant deep-sea isopod, freeze a ball with liquid nitrogen and experiment with static electricity Nov. 10 as he toured one of the state’s largest educational warehouses off U.S. 31 in Pelham.

Riley spent the afternoon touring the Alabama Math, Science and Technology Initiative warehouse, which is near Pelham Baptist Church on U.S. 31 as students from nearly every Shelby County school performed a variety of hands-on math and science experiments.

Through the AMSTI program, the state warehouses thousands of math and science kits, and loans them out to schools without science labs or enough funding to purchase the equipment.

The Pelham warehouse, which is operated by the University of Montevallo, stores AMSTI material and distributes it to much of Central Alabama. The warehouse contains several rows of boxed math and science kits stacked nearly to the ceiling.

“Most people don’t know about the huge warehousing operation here,” said AMSTI Director Steve Ricks. “And you’re not seeing hardly anything out there,” Ricks added. “Most of the materials are out in schools right now. This is just the remnants.”

The program serves more than 340,000 students across the state every year, and allows students to learn complex science and math concepts by working through them, Riley said.

“When you see three elementary-aged kids essentially separating the DNA from a strawberry, that’s pretty impressive,” Riley said. “This is getting to the point where we are not only leaders in education. We are becoming the standard.”

Riley praised AMSTI, and urged legislators to continue to fund the education initiative in the future.

“We have come a long way since this began in 2003, but this is an annual appropriation (by the legislature),” Riley said. “If we could take every person in Alabama and walk them through this warehouse, that wouldn’t even be a debate.”

Dr. Ke Jones, principal of Thompson Intermediate School, said her school benefits greatly from the AMSTI program because it gives the school access to materials it would not have otherwise.

“Anything that is required for a science or math experiment is in that kit,” Jones said. “We even get live animals sometimes, like frogs and worms, and the kids build a habitat for each one of them.

“Everything we need for that specific lesson comes to us in a kit,” Jones added. “Governor Riley has been a big proponent of this program. I just hope the incoming governor will be as big of a proponent for this program.”

University of Montevallo President John Stewart said the program allows schools to offer more than they were able to in the past, no matter what school district they are in.

“When I was a little boy, I can remember laboring at the kitchen table with math and science. It was a fearful thing,” Stewart said. “Governor, thank you for taking the fear out of math and science and replacing it with fun and excitement.”