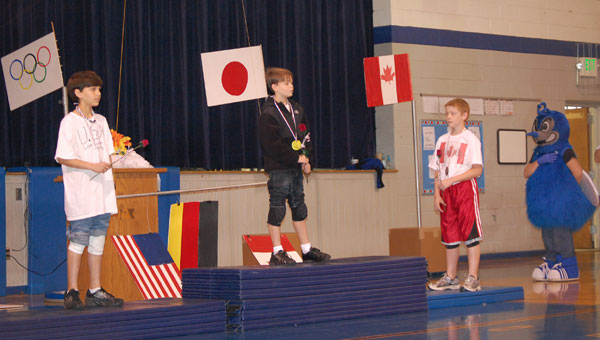 The sports were part of the school’s first Chelsea Olympics, an event organized and carried out by students in the sports education class.

The goal of the event was to mimic all parts of the Olympics, said sports education teacher Sandy Evers. It included an opening and closing ceremony, sporting competitions, live reporter interviews and medal ceremonies.

The students put on the entire event, Evers said. Every student played a part. Athletes, coaches, security, dancers, reporters, announcers, torchbearers and banner carriers were all performed by students. The school’s band provided the music and students designed the programs, costumes, banners and medals beforehand.

Ninety-three students were involved in making the event a success, Evers said. 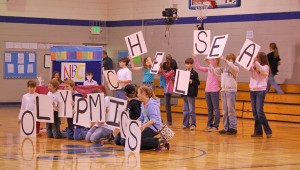 “In sports education, the kids are not only learning about the different sports, they’re also learning about how to organize a sporting event at a sporting venue,” she said. “I wanted to teach them about all the facets of the event. What better way than to do the Olympics?”

This is the first year the school has held the event, but Evers said she’s hoping to make it an annual tradition.

After the opening ceremonies, the athletes competed in the shot put, 100-meter sprint and javelin throw. For safety reasons, the shot put was a small ball thrown across the gym, the sprint required runners to race across the finish line on their knees and the javelins were replaced with foam sticks.

The first, second and third place students were awarded medals in a medal ceremony and the gold medal winner of each competition was interviewed at center court by a student reporter. 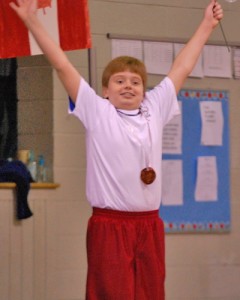 Brett Bearden celebrates his bronze medal after performing in the shot put for the Japanese Olympic team.

Evers said the students voted on the four countries they wanted to represent and Evers chose the roles each student played based on essays they wrote arguing their right for the position.

The school’s faculty and staff voted on the best three logo designs for the program.

After medals were awarded for all three sports, and the closing ceremony was finished, Evers said she hopes the students take away more from the event than good memories.

“I’m hoping they realize there’s more to sporting events than the actual sports,” she said. “ There are a lot of people who don’t get credit for the work they put into these events. Now they know it takes more than just athletes.”

Thompson High School sophomore Kat Cingoranelli drives toward the basket in the Warriors' 51-39 win over Homewood in their season... read more