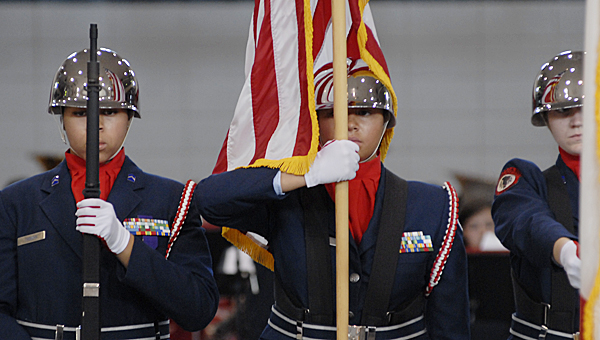 A single candle burned brightly on a small dinner table resting in the center of the Thompson High School gymnasium Nov. 10, symbolizing Americans who have stood against the nation’s enemies throughout its history.

Tied to the candle was a black ribbon, symbolizing the soldiers who left for battle and never returned.

Flanking the candles were several other symbols, like a pair of drinking glasses waiting to toast America’s soldiers when they return home, a slice of bread waiting to feed those soldiers and salt representing the tears shed for those who have fought and those who are still in combat.

“I hope what you will take away from today is that there are people who paid the ultimate price for what we all share today,” said THS Principal Robin Thomas. “They paid that price for things that we take for granted.

“Just for me to be able to get up every day and come to work, to go home and see my wife and family and be safe, for us to worship the way we want to,” Thomas added. “These things are available to you and me because of their service.”

Hundreds of students, parents and veterans crowded into the THS gym Nov. 10 to celebrate Veterans Day and the 235th birthday of the United States Marine Corps.

During the ceremony, the THS band played the theme for each branch of the U.S. armed forces while past and present members of those branches stood to be honored.

“We are gathered here today not only to honor our veterans, but also to honor those in our country who have struggled to provide our most precious right. Freedom,” said Ashley Moulden, a THS senior and member of the school’s Air Force Junior ROTC. “Many paid the ultimate price for that right.”

During the ceremony, Moulden also praised the opening of the Alabama National Cemetery in Montevallo, which serves as the final resting place for more than 600 veterans.

“Since our last Veterans Day ceremony, we have been honored to have the National Cemetery in Montevallo,” Moulden said. “Today, it serves as the resting place for over 600 veterans from World War I to today’s battlefields in Iraq and Afghanistan.”

The Junior ROTC also held a memorial for the Alabama soldiers who have died in Iraq and Afghanistan in the past year, including Army Pfc. Andrew Hand, son of Spain Park High School football offensive assistant coach Kenneth Hand, and Marine Lance Cpl. Thomas Rivers Jr., of Hoover.

“We are here to recognize those who have fought for our country,” said Derrick Davis, a member of the THS Junior ROTC. “Without those great soldiers, we wouldn’t be here today.”

Following the ceremony, the THS student body gave a thunderous standing ovation to the veterans who attended the event.

“On behalf of the students, faculty and staff of Thompson High School, I personally thank all the men and women in the service and the first responders who have served this country,” Moulden said.