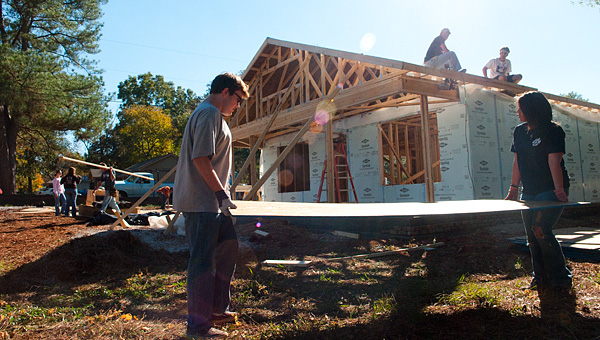 WILTON — A group of Pelham High School students spent their day off from school Nov. 11 helping a family in need in Wilton.

The students volunteered with Habitat for Humanity Greater Birmingham and spent the day working on the construction of a house that will go to a single mother in Wilton.

The students recently formed a Habitat for Humanity school chapter and the build on Veterans Day was their first time to volunteer as a group. Anna Smith, Pelham High School senior, said the group will focus mainly on fundraising for the organization. Their ultimate goal is to raise enough money to sponsor the building of a house. Until then, the group plans to volunteer as often as they can. 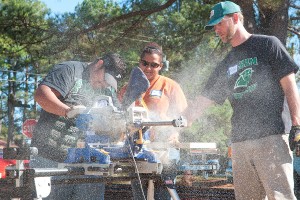 “It’s different than just giving money to something,” Smith said. “You’re sharing your time for something meaningful. This is going to be someone’s home.”

School was closed for Veterans Day, but the students said they didn’t mind giving up their free time to help with the build.

“What else would we be doing?” Smith said. “We’d just be sitting around watching TV.”

Senior Mitchell Morris said the hard work in the sun was worth it because he knows it’s going to help someone in need.

“Instead of being lazy, we wanted to come out to help someone else,” he said.

Habitat for Humanity will be working on the house in Wilton through December, said Sabrina Balch, development coordinator. They hope to have the house finished for the family by Christmas, but they need the help of volunteers, she said.

Groups or individuals can volunteer full or half days Thursday-Saturday from 8 a.m-4 p.m. The site can accommodate up to 25 volunteers, she said.

“We can have volunteers out here every day,” she said. “It definitely helps in the progress of the house. It’s just not as quick without volunteers.”

Balch said volunteers don’t have to know anything about construction in order to help. Many of the Pelham students had never stepped foot on a construction site before, but were taught how to operate power tools within a few hours.

“It’s great because you get to work alongside the family a lot of times,” she said. “It’s giving someone a hand up, not a handout. It’s helping someone who is working to better themselves.”

The house in Wilton will go to Melissa Staffney and her three children. Staffney was raised in Wilton and graduated from Montevallo High School and attended Jefferson State Community College. She currently works as an assembly worker at AGC Automotive Americas Company.

“My children and I are truly blessed to have a stable home that we can call our own,” Melissa said. “I would like to thank Habitat for Humanity for making my dreams come true to be a homeowner. This will change our lives in so many ways. We can finally be able to live comfortably in a safe place.”

For more information on Habitat for Humanity or to volunteer for a build, visit Habitatbirmingham.org.