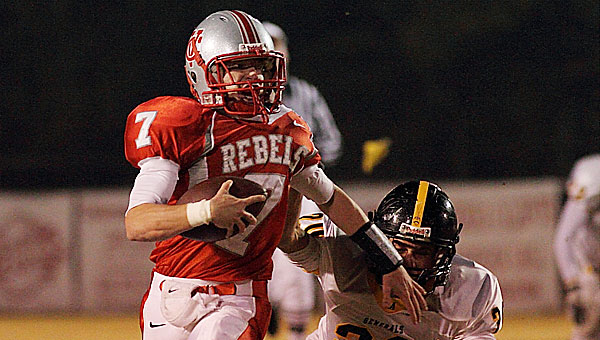 A key fourth-down stop for the Rebels in the third quarter, followed by a successful fourth-down conversion of their own late in the fourth quarter helped lift Coosa Valley (10-2) over the Generals.

“I’m not happy with the way we played, but we fought to win the game,” said Coosa Valley head coach Vince DiLorenzo. “To get into the state championship sometimes is harder than winning it.

“This was a players’ victory. I didn’t give them much help,” DiLorenzo added. “They had the courage and the stamina to win the game.”

The Rebels racked up 213 yards of total offense, and quarterback John Bullen completed 8-of-9 passing attempts for 86 yards.

The first points of the game came when an Autauga punt snap sailed over the kicker’s head at the 9-yard line, bouncing out of the back of the end zone for a safety to give Coosa Valley a 2-0 lead.

The Rebels struck again about midway though the second quarter when sophomore running back Ryan Batson capped off a 42-yard scoring drive with a 5-yard touchdown run. Cody Garrett’s extra point gave the Rebels a 9-0 lead.

But the Generals answered back, connecting on a 45-yard field goal as time expired in the first half.

Autauga Academy threatened to score again on its first drive of the second half, but the Coosa Valley defense stopped the Generals on a fourth-and-2 play at the Rebels’ 3-yard line.

After Coosa Valley was forced to punt on the ensuing possession, the Generals scored the go-ahead touchdown on its next possession when O.J. Howard reeled in a 32-yard touchdown pass. Stuart Dawson’s extra point gave the Generals a 10-9 lead early in the fourth quarter.

The Rebels were forced to punt the ball away on their next possession, but recovered an Autauga Academy fumble on the Generals’ 35-yard line two plays later.

After marching down the field and converting a fourth-down conversion, the Rebels scored the game-winning touchdown on a 4-yard Bullen run. Coosa Valley’s two-point conversion was unsuccessful, bringing the game to 15-10.

“What a game, what a game,” DiLorenzo said shortly after his players emptied the water cooler on him. “You don’t get a chance to play for the state championship often.”