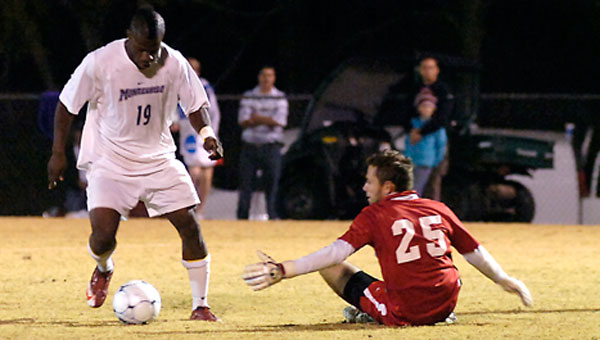 The ninth-ranked University of Montevallo men’s soccer team battled Anderson University to a 1-1 tie in regulation in the first round of the National Collegiate Athletic Association Division II tournament at home at Varsity Field before ended its season with a 4-2 loss following a round of penalty kicks.

The Falcons’ lone goal of the match came from senior Nathaniel Foster, who scored just 1:16 into the second half to tie the match at one.

The Trojans controlled most of the first half. Anderson broke through at the 35:13 mark of the match, as Lasse Sohrweide and Mark Smith used a little give-and-go allowing Sohrweide an open look at the net, which he buried past the Montevallo keeper.

The half ended with the Trojans up 1-0. The second half was much different, as the Falcons came out on fire and scored just 1:16 into the period when Foster took the ball down the heart of the pitch and beat the Anderson defense for a one-on-one with the keeper. Foster slid the ball past an outstretched keeper to tie the game at 1-1.

The Falcons continued to press but were unable to break through. Late in the period, the Trojans had a scoring chance but they were thwarted by Montevallo defender Austin McIntosh, who stopped the ball from crossing the goal line after it made its way past the Montevallo keeper.

Junior Phil Jackson was the Falcons’ second shooter and he stepped up and made his shot, but he was then called back because he had not waited for the referee’s whistle. On his second attempt the shot knocked off the post for the Falcons’ first miss. Two shooters later, Anderson keeper Benjamin Pepion made a diving save to clinch the win for the Trojans.

FROM STAFF REPORTS The University of Montevallo men’s soccer team was selected as the No. 1 seed in the Southeast Region of the National... read more