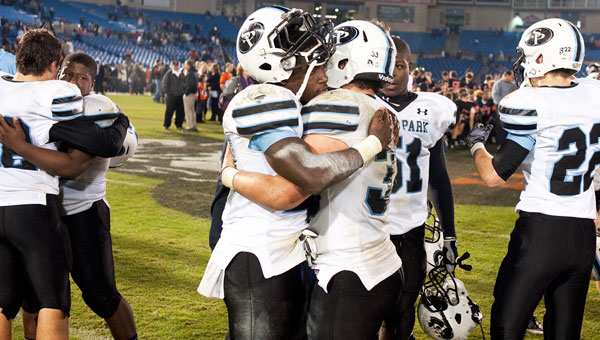 HOOVER — The scoreboard at Regions Park read Hoover 30, Spain Park 10 following a rematch between the two rivals in the second round of the Alabama High School Athletic Association Class 6A playoffs.

However, the margin between the Jaguars and the Buccaneers came down to one play.

With the Bucs holding a precarious one touchdown lead and momentum swinging in the Jaguars’ favor, Hoover senior receiver Jaylon Denson and Spain Park senior linebacker Alex Payne collided in the end zone with Denson juggling a pass from quarterback Ryan Carter before securing the ball for a game-clinching touchdown on a third-and-20 play from the Spain Park 31-yard line.

Among the disappointed on the Spain Park sideline was interim coach Ben Berguson, who took over a fractured Jaguars’ team three days before the 2010 season began and led it to one of the most memorable seasons in school history.

Sophomore quarterback Nick Mullens kept the Jaguars (6-6) in the game despite facing heavy pressure from the Hoover defense. Mullens completed 16-of-31 passes for 203 yards, but his four interceptions were too much for Spain Park to overcome.

“You can’t turn the ball over four times and expect to win,” Berguson said. 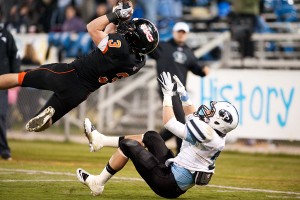 Over the top of Spain Park receiver Zachary Michael, Hoover defensive back Preston Sanford comes up with an interception. (Reporter Photo/Jon Goering)

Spain Park cut into a 17-3 halftime deficit despite an injury to Mullens’ top receiver. Senior Zak Michael, who caught four passes for 45 yards in the first half, left the game late in the second quarter with a fracture in his right leg. 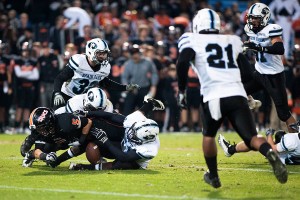 A gang of Spain Park tacklers knock the ball out of the arms of Hoover's Dakota Daniel, but he was ruled down before the ball came out. (Reporter Photo/Jon Goering)

Junior Reid Reinagel stepped up in Michael’s absence, as he caught four passes for 40 yards and a touchdown in the second half. Reinagel finished with six receptions for 64 yards.

Hoover jumped out to an early 7-0 lead after the first quarter following a nine-play, 76-yard opening drive, which was capped by a 1-yard touchdown run by Justin McArthur with 9:11 remaining in the opening quarter.

Spain Park drove 73 yards on 14 plays on its first possession of the game, which ended with a 24-yard field goal by Jake Hoffman to cut the Bucs’ lead to 7-3 with 4:21 left in the first quarter.

Spain Park forced Hoover to punt the ball on the Bucs’ ensuing possession, but Mullens’ first interception gave Hoover the ball back deep in Jaguars’ territory. Hoover kicker Larsen Real extended the Bucs’ lead to 10-3 with his 20-yard field goal with 10:43 left in the first half.

Following a Spain Park punt, McArthur scored on a 13-yard run with 8:30 remaining in the second quarter to extend the Bucs’ lead to 17-3. McArthur rushed for 104 yards and two touchdowns in the first half.

Spain Park opened the second half with a nine-play, 65-yard scoring drive, capped by a 22-yard touchdown strike from Mullens to Reinagel, to cut the lead to 17-10. 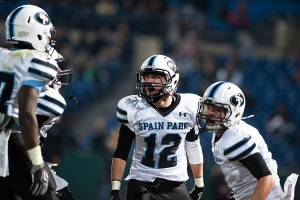 Defensive back DeVon Brown kept Spain Park within striking distance with his interception of a Carter pass at the Jaguars’ 2-yard line midway through the third quarter. Following the interception, Spain Park drove 74 yards to the Hoover 24-yard line before an incomplete pass by Mullens on fourth down gave the ball back to the Bucs.

Linebacker Destin Challenger recovered a fumble by Carter on the ensuing Hoover drive, but the Jaguars couldn’t take advantage of the turnover and were forced to punt the ball back to the Bucs.

Following the punt, Hoover went on a 13-play, 71-yard scoring drive. The Bucs melted the clock with 12 straight running plays by McArthur and Caleb Sims before Carter hit Denson in the end zone for a touchdown to push the lead to 24-10 with 3:10 remaining in the fourth quarter.

The Bucs intercepted a Mullens pass and returned it for a touchdown to push the lead to 30-10 with 2:02 left in the game. 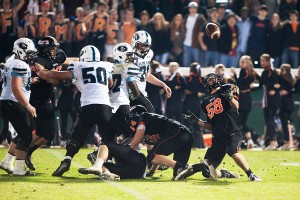 After Hoover's Tyler Roberts (44) put a hard hit on Spain Park quarterback Nick Mullens, Taylor Mason (58) caught the ball in the air and returned the interception for a touchdown to seal the victory. (Reporter Photo/Jon Goering)

Michael, who played a key role in Mullens’ development at quarterback this season, said the Jaguars left everything they had on the field in their final game.

“We came a long way,” Michael said. “We went through a lot this season. We gave 110 percent. We never gave up.”