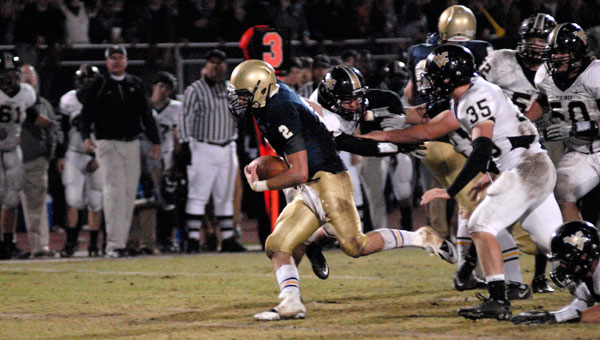 Briarwood Christian School quarterback Ben Craft runs past a Walker defender in the Lions' 21-7 win over the Vikings in the second round of the Alabama High School Athletic Association Class 5A playoffs Nov. 12. (Reporter Photo/Davis Potter)

Luckily for the Lions, the 46 minutes and change remaining in the contest gave them enough time to come back and deliver the knockout punch.

Junior running back Sam Whitaker darted around the right end for a 5-yard touchdown run with 1:19 left in the game to lift Briarwood to a 21-14 victory over the visiting Vikings Nov. 12 at Lions Pride Stadium.

The win moved Briarwood (11-1) into the third round of the Alabama High School Athletic Association Class 5A playoffs, where the Lions will host undefeated Fort Payne High School Nov. 19.

“It was just one of those games where you have to block and block and block, and sometimes it works,” Yancey said. “You keep banging your head against the door, and finally it opened up. It was a hard fought win.”

The Lions got a sense just how hard it would be when the Walker offense made its presence known early, as quarterback Carson Roberts connected with wide receiver Maxwell Young for a 68-yard touchdown strike on the Vikings’ first offensive play of the game to put Briarwood behind the eight-ball.

“We didn’t get rattled,” safety Chad Davis said. “Whenever we get rattled, we seem to play worse. We calmed down and we played physical football. That’s pretty much it.”

After mustering just three first downs and 49 total yards in the opening quarter, the Lions’ offense woke up to answer in the second quarter.

Briarwood quarterback Ben Craft got the Lions on the board with an 8-yard touchdown run with 7:15 left before halftime, and Wilson Whorton’s extra point knotted the score at 7.

After Briarwood recovered a Walker fumble on the Vikings’ next possession, Craft found junior Devin Bowman in the back left corner of the end zone for a 12-yard touchdown pass to cap a nine-play, 48-yard drive with 3:33 remaining in the second quarter to give the Lions a 14-7 lead at halftime.

Craft went 8-for-14 through the air for 71 yards and a touchdown while rushing 24 times for 94 yards and another score.

The Lions looked poised to increase its lead on their opening second-half possession, moving the ball to the Vikings’ 8-yard line in 11 plays. The drive came to a halt on the next play, however, when Whitaker couldn’t handle an option pitch from Craft. Walker’s Brandon Robinson recovered the fumble at the Vikings’ 14-yard line.

Briarwood set itself up with good field position again when Roy Gilbert broke through and blocked the Vikings ensuing punt — his second blocked punt in as many games. Briarwood’s Torn Muir Taylor recovered for the Lions at the Walker 9-yard line.

Disaster struck once again for the offense when Whitaker coughed up his second fumble of the night on the next play.

The Lions, though, weren’t about to give up on their running back.

“After he came off (the field) on the fumble, I said, ‘You’re going to get your chance to redo that, so don’t worry about it,’” Yancey said.

The Vikings used the miscue to draw even again, as Roberts went back to the deep ball to find Jacquese Kirk for an 81-yard touchdown pass as the third-quarter clock expired to tie the game at 14.

Roberts completed 19-of-32 passes for 269 yards with two touchdowns and two interceptions.

After forcing a punt late in the fourth quarter, the Lions took over at the Walker 44-yard line. Briarwood was set up with a second-and-goal after driving 39 yards in five plays.

With time running out and the game in the balance, the Lions called on Whitaker.

“I was honored that (the coaches) had trust in me to come through, and that means a lot” said Whitaker, who carried the ball 21 times for 87 yards and a touchdown. “I can’t explain how good that blocking was outside.”

There was no fumble this time. Just a celebration with his teammates in the end zone after scoring the go-ahead touchdown 5 yards later.

“He came through,” Yancey said. “That’s the beauty of football. You get second chances.”

Whitaker said the team has developed a never-say-die attitude.

“We’re tenacious,” Whitaker said. “We have a drive to win, and that’s what we came here to do.”

FROM STAFF REPORTS GIRLS The Shelby County High School girls’ basketball team jumped out to an early lead for the... read more