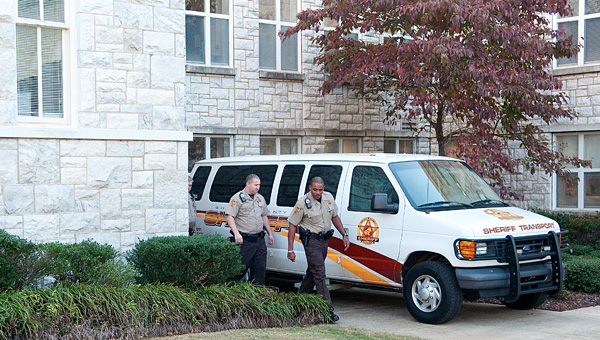 After loading Ryan Russell into the transport vehicle, Sheriff's deputies walk to the front of the vehicle following the first day of trial on Nov. 12. (Reporter Photo/Jon Goering)

Russell is accused of killing his second cousin 11-year-old Katherine Helen Gillespie on June 16, 2008 at his rental home in Inverness. Russell has pleaded not guilty and prosecutors have said they are seeking the death penalty in this case.

Russell briefly glanced at each picture as it was displayed to the jury, showing no emotion and then gazing at the floor.

The three officers who responded to the scene of the crime, George, deputy Mel Janousek and deputy Jay Fondren, were called as witnesses.

Janousek said he was called to the residence, at 5048 Kerry Downs Road, at approximately 6:30 p.m. in connection with a hit and run car accident.

Arriving at the residence, Janousek said he talked with three teenagers who were parked outside the house and claimed the homeowner, Russell, had rear-ended them on Inverness Parkway and fled the scene.

Janousek said the homeowner did not respond when he rang the doorbell and knocked on the door. Janousek said he looked in windows on the garage door and saw the wrecked SUV backed into one of the garage bays.

He said the law did not allow him to make a warrant-less entry into the home to make an arrest, so he left the scene.

Janousek, Fondren and George responded to the residence again later that night when they were called to do a wellness check on the residents after a 911 call from Russell’s ex-girlfriend.

Fondren said upon their arrival, the ex-girlfriend said Russell’s family was concerned because they could not get in touch with him or Gillespie.

When the officers entered the home through a back garage door, they said they saw an empty gun case in the garage with its door ajar and what appeared to be blood on the doorframe leading into the house.

Janousek said after entering the home and calling out for the residents, he found a large amount of blood covering the floor of a laundry room near the garage. As Janousek and Fondren continued to clear the house looking for residents, George reentered the garage, where he found Gillepie’s body in the SUV.

“When I got to the drivers side I looked back through the driver’s side into the backseat and I saw a pair of legs,” George said. “I hollered for rescue to come check and opened the rear passenger’s door. The rescue guys, I guess, were checking for a pulse. They did a real quick check on her, and it was clear she was dead.”

In his opening statement, Bostick said he planned to present evidence to prove Russell shot Gillespie in the back of the head with a .40-caliber automatic handgun before stuffing her body in a trash can and storing it in the backseat of the his SUV.

By AMY JONES / Associate Editor HOOVER – While the Alabama Department of Transportation works on an elevated lanes plan... read more