Resident gets Camper of the Year award 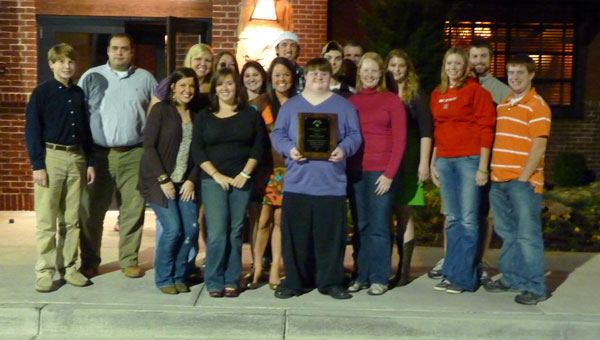 Michael Oglesby, with plaque, is flanked by the Camp ASCCA counselors who came to Alabaster to surprise him. (Reporter photo/Amy Jones)

ALABASTER — When Michael Oglesby got ready to go to dinner at Alabaster’s Longhorn Steakhouse Nov. 12, he didn’t know who would be waiting for him there.

Oglesby and his family were greeted by 20 Camp ASCCA counselors, there to honor Oglesby, who has Down syndrome, as the Camp ASCCA 2010 Camper of the Year.

Oglesby, 20, said his favorite part of the camp was participating in sports, such as field hockey, and getting to ride on a zip line. The camp is held in Jackson’s Gap, Ala.

Camp counselor Jason Crowder said Oglesby won the award because he was never afraid to get involved at the camp, even doing an “awesome” dance at the camp’s talent show.

“He did a great job, and he had a great attitude,” Crowder said. 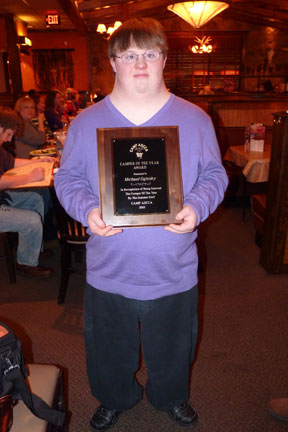 Jonathan Daughtry, also a camp counselor, said Oglesby was chosen out of about 500 campers to receive the honor. He said Oglesby was “speechless” when he realized the counselors had come to Alabaster to honor him.

“He just stared at (the award) for a long time,” Daughtry said. “He was really excited and really thankful. He thanked everybody.”

In addition to the award, Oglesby will get to attend a special Christmas weekend camp at Camp ASCCA for free.

Daughtry said Oglesby won the award by being himself.

“He was so sociable, and everybody enjoyed his company,” Daughtry said. “People just wanted to get to know him. He was loved by everybody.”

“It was very unexpected, and we’re very proud of Michael,” Mouser said. “He’s a very social person. It’s a great feeling for us. He’s accepted everywhere he goes — and we’ve got the award to prove it.”

By AMY JONES / Associate Editor WESTOVER — A Nov. 12 crash claimed the life of a mother and two... read more