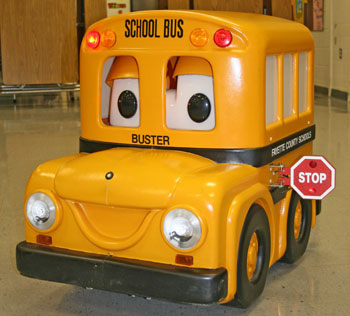 Buster the Bus winked his eyes, flashed his lights and spun his wheels, while students cheered him on.

Students at Wilsonville Elementary School got an entertaining but very important and serious message from the visitor who took time to come by last week.

Buster the Bus came along with Bryan Nash, a former safety inspector for the state of Alabama.

Nash is the voice of Buster the robotic Bus (a special program disguises his voice), and uses remote controls to guide him.

Buster has even made it onto TV, and you can see his video by searching for “WLOX Buster the Bus.” Buster visits schools all across Alabama, Tennessee, Mississippi, Georgia and Florida promoting safety.

“We talk about everything from getting up on time and getting to the bus stop, to rules at the bus stop, the danger zone around the bus and riding the bus. I even have a platform with seats mounted on it to show the kids how to sit on the bus,” Nash said.

The students are able to learn valuable safety advice while staying fully attentive through the humor and jokes Buster made.

Buster the School Bus likes to tell jokes, flirts and sometimes play jokes on the teachers.

The program is geared toward kindergarten all the way through middle school.

The students learned that one of the most dangerous times for those riding the bus is loading and unloading.

They were taught the importance of looking both ways before crossing the road, because you cannot always count on others to do what they are supposed to be doing.

Students were also told to go straight home after the bus drops them off and not make any detours or stops in between.

Buster taught the student to stay 10 feet from the bus to be sure the driver can see them and they are not in the blind spot or danger zones.

Fifth-graders learn about teaching by helping second-graders with math

Allison Hobbs teaches a fourth- and fifth-grade class at Wilsonville Elementary School. This year the class has been utilizing the... read more