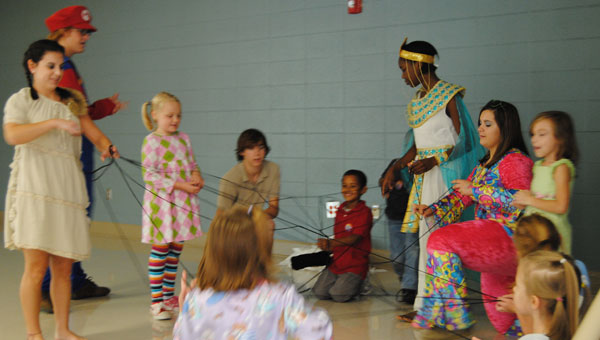 Twenty-six members went to the after- school care program at the elementary school and entertained more than 100 kids for two hours. The event was a Halloween theme, most of the members were dressed in costumes.

The members organized games, songs and crafts for the elementary students. The children had fun “dressing the mummy,” making ghosts out of dum-dum suckers, making handprint ghosts, singing “ring around the pumpkin,” and spinning a human spider web. The club members also provided a snack called “dirt pie” (pudding, Oreos and gummy worms.)

Steve Walker, organizer of the after school care program said, “I have never seen a group of kids so happy, so willing, so organized, so together, so good to children and such a joy to be around.”

As parents picked their children up, each child received a goodie bag.

Some even cried when their parents picked them up because they were having such a good time.

This was a great opportunity for the members, giving them the chance to participate in community service while having fun and interacting with their peers and younger children. FBLA is already planning a Christmas Bash with the after school program in December.

Other events included were a Veterans Day project—they will do yard work and provide dinner for a local veteran—and the Dress for Success program in November. The program encourages all students to dress professionally. Participating students will hear a guest speaker talk about how to be successful in the work force. In February, they will sponsor a walk-a-thon to raise money for the March of Dimes.

“Any student in grades 7-12 who is currently enrolled in a business course may become a member,” Bone said.

FBLA is the largest business career student organization in the world. It is a non-profit education organization that prepares students for careers in business and business related fields. Its goal is to equip students with leadership skills, as well as confidence, integrity, money management and community service.

The B-Team Angels from Arab, spread joy, sunshine and love everywhere they travel. If you watched television in the ’80s,... read more